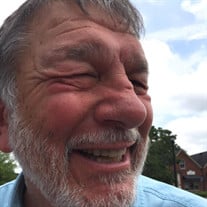 Brad Harp was called home on December 23, 2020 after a short battle against pancreatic cancer. Recently of Ball Ground, Ga., Brad was born in Chickamauga, Ga. on April 19, 1944 to Ansel and Louise Harp and older sister Jackie. The family resided on Lookout Mountain with a cast of colorful characters that lived on in his stories for decades, including Ernestine, Willene, Imogene, Ora May, Claudie and John Thomas who starred in many adventures at Nickajack Lake. Of these childhood companions, we cannot report, but he is survived by his sister Jacqueline Higginbotham (John). At age 14, his mother made one of the most influential decisions of his life and sent him to Mount Berry School for Boys. He lived in Pilgrim Hall with a group of boys who became like brothers. He worked his way through school and fondly recalled plowing nearly every field on campus, early morning milking at the dairy and burning trash at the hog farm under the guidance of Mr. Hoyle who would take him fishing and was so influential that Brad once trekked through the woods for a souvenir brick from the trash pit. It delighted him that both of his daughters attended Berry College. After high school graduation in 1962, Brad attended Middle Tennessee State University and earned a degree in Agriculture. There, he made one of the best decisions of his life by asking Anne Williams on a date. She later became his bride on September 10, 1967. At 6'4”, his wife's 5'2” height made them terrible dancing partners, but they were a perfect fit in every other way. She was the light of his life for the next 53 years. The couple welcomed their first daughter, Anna Elyse in 1973, earning him his favorite title of “Dad.” Son Justin Bradley followed in 1976, and then daughter Ashley Brooke in 1979. He taught all three of his children to ride a bike, make an outline, value an education, work hard, have fun on vacation (or else), invest wisely, hug a neck and that he was too old of a cat to be fooled by kittens like them. The Harps resided in Watkinsville, Ga., where Brad was renowned for shouting down many a referee or umpire at the hundreds of sporting events he attended for his kids. Another title held by Brad was Chicken Man. A forty-plus year veteran of the poultry industry, he began his career as a Breeder Manager with Central Soya in Chattanooga. He spent decades at Seaboard Farms in Athens, Ga. and retired as Vice President of Live Production from Cagle's Inc. in 2012. Whenever his family commented on the smell of chicken house on his clothes after a day of work, he'd say, “It smells like money to me.” After retirement, Brad spent a great deal of his time with the next generation of Harps. His six grandchildren called him Grandpa, and each of them napped on his chest as a rite of passage, were burped by his giant hands and sung lullabies in his deep voice. He also enjoyed driving Georgia’s country roads with Anne in search of antique tractors, took up playing piano at 73 and perfected smoked brisket. Brad leaves behind a lot of people who love him, but none more than his beloved wife Anne, his three children Anna Collins (Bill), Justin Harp (Eva) and Ashley Sheppard (Jason) and their spouses, and his six grandchildren Dillon, Reese, Elyssa, Ethan and Asher Harp and Zachary Collins. Due to COVID-19, a family-only graveside service will be held December 28. In lieu of flowers, please eat a steak, grow a tomato plant or make a donation in his name to one of the following: ● First Baptist Monroe, his final church home ● Lifeline Adoption Services, in honor of his two adopted grandchildren Berry College Historic Heritage Fund, which supports preservation of a place that was always home to him

Brad Harp was called home on December 23, 2020 after a short battle against pancreatic cancer. Recently of Ball Ground, Ga., Brad was born in Chickamauga, Ga. on April 19, 1944 to Ansel and Louise Harp and older sister Jackie. The family resided... View Obituary & Service Information

The family of Alvin Bradley "Brad" Harp created this Life Tributes page to make it easy to share your memories.

Send flowers to the Harp family.