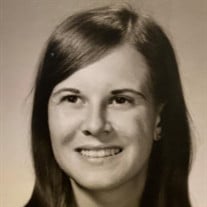 Anita Smith Murray was born on June 9, 1950 to Mr. Harold D. Smith and Mrs. Barbara Allen Smith of Rome, GA. Anita graduated from West Rome High School as Valedictorian of the Class of 1968. She attended the University of Georgia, where she graduated Summa Cum Laude in 1972 with a B.S. in Microbiology and in 1973 with an RPh degree in pharmacy. Shortly after graduation, Anita was hired to work in a small pharmacy in Cartersville, GA, where she met her husband-to-be, John Jerome Murray, “Jerry” to friends & family. They were married on June 14, 1975 and had three daughters, Mary-Kate, Allison, and Erin. Jerry Murray passed away on January 2, 2007 in Cartersville, GA. Anita stayed in Cartersville to be close to her daughters and grandson, Matthew. She retired in 2011 and moved to Canton, GA in 2017. Anita passed peacefully in her sleep on December 6, 2021 after a long journey with Alzheimer’s disease. She was 71. She is reunited in Heaven with her parents, Harold and Barbara Smith, husband, Jerry, and sister Alysia. Anita is survived by her three daughters Mary-Kate (William) Starkel, Allison (Scott) Rounds, and Erin, and nine grandchildren Matthew (15), Halley (14), Aiden (11), Ella (8), Maggie (7), Liam (6), Evie (4), Emma (4), and James (7 months). Anita was a devout Christian and active member at Crosspoint City Church in Cartersville, where she loved serving as a volunteer in the children’s ministry. Anita was a life-long Georgia Bulldogs and Atlanta Braves fan, thanks to the fervent followings of her parents and continued love of sports from her daughters. Anita played guitar and was a classically-trained pianist, just like her Daddy, and she passed their shared love of country music and Christmas hymns to her daughters. Seldom would a car ride happen where country radio was played without their voices rising in unison. Anita loved animals. The Murray family always had pets in the house, and they were loved immensely by all. One of Jerry’s last gifts to Anita was Snoopy, her beloved terrier and companion for many years. Anita adored spending time with her family, and she never missed a gathering of friends and family to celebrate holidays and birthdays. Above all, she loved being with her grandchildren. Her entire face would light up in the presence of her grandbabies, and they love their “Deda” just as much in return. Anita was a source of unending love, light, and warmth to the people in her life. May her memory be a blessing to all who knew her. Services will be held at 11:00am on Wednesday, December 15 at Crosspoint City Church in Cartersville. In lieu of flowers, the family asks for donations to Crosspoint City Church to honor Anita’s service to the community. Revelation 14:13 - And I heard a voice from heaven saying, “Write this: Blessed are the dead who die in the Lord from now on.” “Blessed indeed,” says the Spirit, “that they may rest from their labors, for their deeds follow them.”

Anita Smith Murray was born on June 9, 1950 to Mr. Harold D. Smith and Mrs. Barbara Allen Smith of Rome, GA. Anita graduated from West Rome High School as Valedictorian of the Class of 1968. She attended the University of Georgia, where she... View Obituary & Service Information

The family of Anita Smith Murray created this Life Tributes page to make it easy to share your memories.

Send flowers to the Murray family.