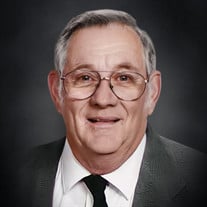 Calvin Monroe Eldridge Jr, 86, of Ball Ground, GA passed away peacefully in his home on January 16, 2022. He was born December 1, 1935, in Miami, FL. He is preceded in death by his daughter, Natalie Louise, his grandson’s Ryan and Christopher, and his son-in-law, Mike Newman. He was a loving husband, father, grandfather, brother, and uncle. He is survived by his loving wife of 64 years, Alice Faye Eldridge, his daughter, Diana Newman, his son, Calvin Eldridge (Sheri), his brother, James Eldridge, his grandchildren, Melissa Bronson (Jason), Alison Borton (Chad), Jamie Coogan (Zach), Kimberly Grissom (Marc), Jennifer Bannochie (Doug), many great grandchildren and great-grands (21), three nephews and one niece. He was employed by Eastern Airlines from 1958 – 1989 and loved every minute of it. His love of airplanes was apparent in all his conversations. He loved and adored his wife, children and grandchildren. He was a joker and loved to play pranks on his family. His love of music was clear as he could tell you any song/artist that came on the radio in his earlier years. He always shared his love of Faye. They met at Florida Christian College in Tampa and were married three months later on February 14, 1958. He was a faithful Christian and even in his declining years he constantly wanted to know if it was time to go to church where he was most comfortable. He was a very quiet, private person other than when he was around members of his church family and when he saw a baby. He was a social butterfly when around those he loved the most and if there was a baby present, he would talk up a storm about his wonderful children when they were the same age. Although in his later years his hearing was not good, if you spoke up, he would sit and listen and provide loving guidance. Even though he would pretend he didn’t like animals, he loved them, and his family has evidence that he really adored them, even going to the Dairy Queen to get them ice cream or a hamburger and playing with them or sleeping next to them. We know that he has gone to a place of rest to wait for the Lord’s coming. We thank all the doctors and Capstone hospice for the care they provided him and our family, especially in his last days. In his final hours his church family showed their love for dad by singing hymns to bring comfort to him. In lieu of flowers, the family has requested that donations be made in Mr. Eldridge's memory to either the Alzheimer's Association or the Heart Association. The Funeral Service will be live-streamed at: https://vimeo.com/event/1737473

Calvin Monroe Eldridge Jr, 86, of Ball Ground, GA passed away peacefully in his home on January 16, 2022. He was born December 1, 1935, in Miami, FL. He is preceded in death by his daughter, Natalie Louise, his grandson&#8217;s Ryan and Christopher,... View Obituary & Service Information

The family of Calvin Monroe Eldridge Jr. created this Life Tributes page to make it easy to share your memories.

Send flowers to the Eldridge family.