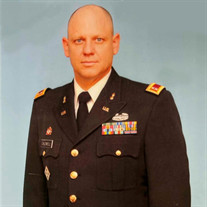 CWO2 (Ret) Carol Ray "Trey" Caldwell 28 December 1969 Millington, Shelby, TN - 13 January 2022 Canton, Cherokee, GA Beloved husband, father and friend, Trey died after a short illness. He was raised in South Texas and descended from eight generations of pioneers, ranchers, stockmen and farmers. It was a history of which he was intensely proud. He moved to Georgia before high school. Trey joined the Georgia National Guard on a student deferment program while still in high school, and went on active duty after graduation. Trey's Guard unit was called to serve in Operation Enduring Freedom in Iraq in 2003. During his 31 years active duty in the Guard, his units were mobilized to support communities in the Southeast with various disaster relief missions, perhaps the most notable being the aftermath of Hurricane Katrina in New Orleans. He was instrumental in the formation of the first Chemical Decontamination Unit in Georgia. Trey retired from Georgia National Guard in 2018 as a Chief Warrant Officer 2. He was awarded (amongst others) a Meritorious Service Medal, the Combat Action Badge, and the Army Commendation Medal with three Oak Leaf Clusters. Trey was passionate about politics, patriotism, parenting, and poker parties. Gardening was his avocation and great joy, and he did have the proverbial green thumb. Houseplants sat on every surface in their home, and little garden plots were tucked all over their yard. As a father, he was actively involved with his sons in scouting programs and coaching Little League baseball. He enjoyed woodworking, and, like his father and grandfather, he was a master craftsman. He was preceded in death very recently by his wife, Caralee Ormsbee Caldwell. He is survived by his mother, Rosann York Gilbert of Houston, Texas, and his father, Carol F. Caldwell, Jr. of Canton, Georgia; and by two sons, Christopher Blake and Kyle Mackenzie Caldwell of Woodstock, Georgia. Trey will be interred with military honors in the Georgia National Cemetery near Canton at a later date. In lieu of flower memorials, friends and family may consider planting and nourishing a few seeds or cuttings. The family especially wants to thank the dedicated nurses and doctors in ICU at Northside Hospital Cherokee for their kindness and care of Trey. The caring staff of Darby Funeral Home is honored to serve the Caldwell family.

The family of CWO2 (Ret) Carol Ray "Trey" Caldwell created this Life Tributes page to make it easy to share your memories.

Send flowers to the Caldwell family.