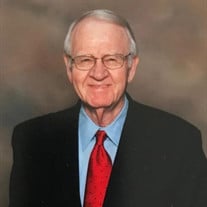 Charles William "Bill" Dennard, 94, of Canton, GA, died September 4, 2021. Bill was born on September 2, 1927 in Savannah to Charles and Mamie (Young) Dennard and was their only child. As a young boy he enjoyed hunting, fishing and the outdoors. One of his earliest jobs was tracking a particular species of fly for the Public Health Department in South Georgia, where he would knock on rural front doors and announce himself as the “Fly Man.” Bill will be remembered for the animated way he told this and many other stories, and for his wry sense of humor. Bill graduated from Boys High School in Atlanta in 1945 and enlisted in the United States Marine Corps.. As MP he patrolled Camp Pendleton, California on his beloved horse “Elmer”. After service, Bill graduated from the University of Georgia in 1949 with a degree in accounting with honors. He became a tax partner at Arthur Andersen & Company, where his clients included prominent businessmen and companies. In the mid-1970s, Bill started a regional furniture leasing company and sold it a few years later. He then returned to accounting until retirement at age 82. Bill was a member of Cherokee Town & Country Club and the Canton First United Methodist Church. He served on several nonprofit boards including the Angel House in Canton, GA, was an avid reader, student of US history (especially the civil war), and a devoted family man. An animal lover, Bill had many dogs including Willie, Molly and Bella. His face lit up when one of his beloved terriers would jump up into his lap. Survivors include his beloved wife of 42 years, Alice W. Dennard; daughter Janet Arms of Atlanta; son Don Dennard (Gwynie) of Atlanta; daughter Robin Ernstes (Joe) of Holly Springs, Georgia; stepson David Taylor (Ann) of Petaluma, CA; eight grandchildren; and eleven great grandchildren. In lieu of flowers, donations may be made to the Alzheimer’s Association or the Cherokee County Humane Society. Per Bill’s wishes, his remains will be scattered at the Georgia National Cemetery on Wednesday, October 13th at 3pm and a family service will be held at a later date.

Charles William "Bill" Dennard, 94, of Canton, GA, died September 4, 2021. Bill was born on September 2, 1927 in Savannah to Charles and Mamie (Young) Dennard and was their only child. As a young boy he enjoyed hunting, fishing and the outdoors.... View Obituary & Service Information

The family of Mr. Charles William "Bill" Dennard created this Life Tributes page to make it easy to share your memories.

Send flowers to the Dennard family.