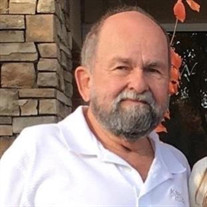 My grandfather, Charles Allen Johnson, or as many knew him, “Charlie,” was born on April 8th, 1946 in Zanesville, Ohio. Charlie attended school and after high school graduation, became a member of the United States Air Force. Charlie served from August 1964 until August 1968. On December 12th, 1969, he married Judy Murrey. Charlie then got a job with NCR and got his Associate of Applied Business degree from Muskingum Area Technical College in the late 80s. Eventually, the Ohio NCR plant closed so Charlie, Judy, and their son, Scott, moved to Atlanta where Charlie continued working for NCR until his “retirement.” My grandpa never really retired though, as his hobby (or second job) of antiquing kept him busy. Charlie and Judy would make appearances at seemingly every auction in the surrounding area of Cherokee County. In addition to antiquing, Charlie enjoyed golf and the family would make trips to the Golf Village where my grandpa and I could be found sitting on a bench enjoying “Mud ice-cream” together. Regardless of where we were, my grandpa made sure that everyone he was with felt like family, including allowing everyone to call him “grandpa.” Charlie was my best friend, he was a loving husband to his wife, a caring father to his son, a proud brother to his siblings, and a companion to his neighbors. In fact, he knew his neighbors so well, he could tell you who was driving just based on the sound of their car. He was a man of routine, never veering from his frequent meals of sausage, always showing up to my carpool line at school 20 minutes early with a James Patterson book in his hand and spending every evening on his back porch before retiring to bed. On the week of July18th, 2021, Charlie passed away peacefully in his sleep at his home in Canton, Georgia. He is survived by his son, Scott Johnson; his granddaughter, Megan Johnson; his three sisters: Connie Davis, Sharon Dittmar, Sandra Little; and his brother, Phil Johnson. I am confident that he has finally joined my grandmother in watching over us all, and is likely excited the Cleveland Browns may be good this year Services will be privately held in Georgia in August. In lieu of flowers, we are asking that donations be sent to the R.T Jones Memorial Library at 116 Brown Industrial Pkwy, Canton, Georgia, 30114 in memory of Charles Johnson.

My grandfather, Charles Allen Johnson, or as many knew him, &#8220;Charlie,&#8221; was born on April 8th, 1946 in Zanesville, Ohio. Charlie attended school and after high school graduation, became a member of the United States Air Force. Charlie... View Obituary & Service Information

The family of Charles Allen Johnson created this Life Tributes page to make it easy to share your memories.

My grandfather, Charles Allen Johnson, or as many knew him, “Charlie,”...

Send flowers to the Johnson family.