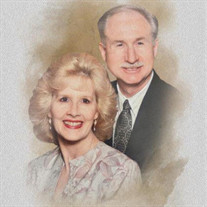 Not sure what to send?

Clarence Wayne Weeks went to be with his beloved Lord and Savior on Wednesday, May 4th at his home in Canton, Georgia. He was lovingly attended to by his daughters at his passing.. He was 82 years old. Clarence was born March 12, 1940 in Oak Hill, West Virginia and was the oldest son of Asa Clarence Weeks and Mary Elizabeth Blackburn. He graduated from Collins High School in Oak Hill and subsequently joined the Air Force where he proudly served his country as an Airman 1C for several years. Following the end of his military service, he returned to West Virginia where he met and fell in love with Anna Faye Jones of Fayetteville. They were married August 31, 1963 at the Fayetteville Church of God. They were married for 56 years and share 2 daughters. Mr. Weeks was employed by AT&T for 35 years as an Accounting and Operations Manager and worked in Virginia, Maryland and Georgia prior to his retirement in 1992. He and Anna enjoyed their early retirement years in Ocala, Florida before returning to Georgia in 2006 to spend more time with their daughters and grandchildren. He loved music, golf, football, western movies, and square dancing. But most of all, he loved spending time with his children and grandchildren. He was their beloved Papa. Throughout his life, Clarence was active in his local church participating as a Sunday School teacher, Choir Member, Financial Leader, and Youth Ministries leader. He and his wife faithfully served churches in Virginia, Georgia and Florida. His home church for the last 16 years was Canton First United Methodist church where he was active member. Mr. Weeks is preceded in death by his parents, Asa and Mary Weeks (Sowers), his brother James Weeks, and his beloved wife of 56 years Anna Faye Weeks. He is survived by his daughters Cristi Weeks Barchie/ Timothy Barchie of Canton Georgia, Sharon Weeks Kinyon/Stephen Kinyon of Woodstock, Georiga and seven grandchildren including Jake and Rachel Axon of Tallhassee, FL, Amanda, Ben and Kate Barchie, Caleb, Joseph and Hannah Kinyon, and brothers Howard T. Weeks of Gaithersburg, Maryland and brother Richard Sowers of Virginia. A celebration of life service will be held at 1:00PM Monday May 23rd at the Canton First United Methodist Church. Visitation will be from 12:00PM until the funeral hour. Dr. Kenny Ott will officiate. Interment will be in the Georgia National Cemetery with Air Force Honors at 9:00AM Monday June 13, 2022. In lieu of flowers, the family appreciates gifts to the Ed Towers Fund of Canton First United Methodist or the Alzheimers Association (ALZ.org). The staff of Darby Funeral Home is honored to serve the Weeks Family. The livestream link is: https://www.cantonfirstumc.org/watch-us-live/

Clarence Wayne Weeks went to be with his beloved Lord and Savior on Wednesday, May 4th at his home in Canton, Georgia. He was lovingly attended to by his daughters at his passing.. He was 82 years old. Clarence was born March 12, 1940 in... View Obituary & Service Information

The family of Clarence Wayne Weeks created this Life Tributes page to make it easy to share your memories.

Clarence Wayne Weeks went to be with his beloved Lord and Savior...