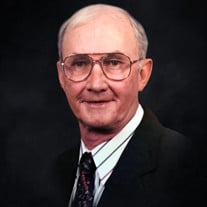 Claude Junior (C.J.) Denney of Canton, Georgia passed away peacefully at his home on February 25, 2021. He was 85 years old. Visitation will be Saturday, February 27, 2021 at Darby Funeral Home in Canton, Georgia from 3:00 p.m. until 8:00 p.m. His service will be 3 p.m. on Sunday, February 28, 2021 at Mt. Zion Baptist Church in Canton, Georgia. He will lie in state from 2:30 p.m. until the funeral hour. He will be interred at the Georgia National Cemetery Tuesday, March 16th at 11am. Junior was born April 14, 1935, in Cherokee County and grew up in the Hickory Flat Community. He served in the U.S. Army from 1956 until 1959 and was stationed in Korea and Japan. He married the love of his life Wylene Fountain in 1959, and they spent 61 happy years together traveling to all 50 states, camping, and taking cruises with family and friends. Junior worked for NAPA Auto Parts in Canton as their outside salesman for 35 years giving him the opportunity to spend each day visiting businesses and getting to know people all around the North Georgia area. Junior believed in giving back to the community and served in many capacities over his lifetime. He coached Cherokee County Youth Football, served as Governor of the local chapter of the Loyal Order of Moose, Lodge # 2129, heading up many campaigns to help those less fortunate in Cherokee County, served as an officer in the Canton VFW, worked as a referee for youth basketball, and served as Trustee for the Cherokee County Game and Fish. Junior was an avid sportsman and outdoorsman, owned and drove a dirt track race car in his younger years, loved to deer and quail hunt, spent many years playing with some of the first ALTA Tennis Teams in Cherokee County, and in his later years took up golf and worked as a ranger for Woodmont Country Club. One final important aspect of Junior’s life was the time he spent yelling, “GO DAWGS!” Junior was a lifetime member of Mt. Zion Baptist Church and was president of his Sunday School class for many years. The most important things in his life were his faith and his family. He loved raising his family, and then was overjoyed when he got to be Granddaddy to his four granddaughters, going to all their sporting events and activities, and then having three great-grandsons in addition to his granddaughters gave him extra joy. Junior is survived by his wife, Wylene Fountain Denney, daughter Diane (Michael) Butterworth, Canton, son Dennis (Judy) Denney, Canton, granddaughters Ashley (Chris) Mills, Woodstock, Amanda Butterworth, Charlotte, NC, Macy (Justin) Farmer, Marietta, and Megan (fiancé Kevin Hady) Denney, Brookhaven. Great grandchildren, Jackson Mills, Brigham Farmer, and Baylor Farmer. Brother George (Charlene) Denney, sister-in-law Pat Denney, brother-in-law Cranston Hatcher, numerous nieces, and nephews.

Send flowers to the Denney family.