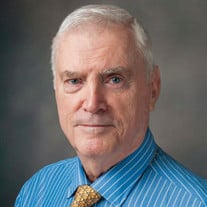 Clayton “Ned” Conger passed away peacefully at home on February 17, 2022. He was born in Loup City, NE on February 8, 1930, the second child of Clayton Childs and Harriet Joy Potter Conger. Ned Conger graduated from Loup City High School in 1948. He attended Nebraska Wesleyan University from 1948 to 1950, transferring to University of Nebraska-Lincoln where he graduated with a Bachelor of Science Degree in Education in 1952. Following a recommendation from a Nebraska Senator, endorsements from several prominent Loup City residents and an FBI background review, Ned was admitted to Naval Officer Candidate School in Newport, RI, and commissioned an Ensign in the U.S. Navy in 1954. He attended Atomic, Biological and Chemical Defense School at Philadelphia Naval Shipyard and served duty in Commander Carrier Division Six on USS Bennington, USS Coral Sea, USS Intrepid and the U.S. Atlantic Fleet. From 1957 to 1962 Ned served duty on USS Randolph and was stationed in Rota, Spain. From 1966 to 1968 he served as Public Affairs Officer for the USS Enterprise coordinating many notable events including an underway visit by President Lyndon Johnson and served as liaison for production of the motion picture “Yours, Mine and Ours” where he befriended another fellow Nebraskan, Henry Fonda. From 1968 to 1973 he served in Vietnam first as Staff Intelligence Officer to Carrier Division Seven and then served as Naval Attaché to the U.S. Embassy, Saigon, Republic of Vietnam. During his military service Ned was awarded the Bronze Star (with Combat “V”), Navy Unit Commendation (4 awards); Meritorious Unit Commendation; Meritorious Service Medal; Naval Reserve Medal; Vietnam Service Metal (8 stars); Armed Forces Expeditionary Medal (Korea); Republic of Vietnam Campaign Medal with Device; Republic of Vietnam Civil Actions Unit Citation; the Vietnamese Navy Distinguished Service Order Second Class and First Class; and the Navy Commendation Medal. After 22 years in uniform, Ned retired from active duty in the U.S. Navy in July 1975 with the rank of Captain. Beginning in 1976 Ned was employed by various contractors over 38 years supporting the U.S. Navy’s F/A-18 Program, including coordinating the F/A 18’s Navy Decision Analysis that led to the F/A 18’s approval for production. Ned developed a reputation as the “Right-Hand Man” for program managers by embodying the persistence and teamwork required to promote continuous improvement processes during the development of the larger F/A 18, the Super Hornet. Towards the end of his career, Ned achieved a bit of celebrity across the F/A 18 community for his Conger Grams, an F/A 18 bulletin reporting on all newsworthy items relating to the F/A 18 aircraft. In 2015, Ned Conger retired at age 85 after serving his country in various capacities for over 60 years. Known as a lifelong problem solver, in 2016 Ned published a book outlining his ideas on solving many of the world’s issues entitled, “Thinking Outside the Oven”. He spent time traveling abroad and was known for planting a seed of friendship wherever he went. Ned is survived by his large and loving family including sister Jane Conger Shaffer, nieces Bretigne Shaffer Calvert and husband Guy, Heidi Shaffer Madzar and husband Sasha, and Gretchen Shaffer Wahlstedt and husband David, niece Nanci Knisely Kyhn and husband Gordy, and nephews David Knisely, Michael Knisely and Patrick Knisely. His cousin Ellen Potter Black and husband Scott were also special in his life. He was preceded in death by his wife of 58 years, Helena de Aruche Conger, infant son Christian, sister Alice Ann Knisely and brother-in-law James Knisely, and brother-in-law Butler Shaffer. Captain Clayton Ned Conger will be inurned at the Arlington National Cemetery at a date to be determined. The family would like to express deep gratitude to the many families and friends who have sent cards and condolences. The family requests, in lieu of flowers, that memorial contributions be made to the Sherman County Historical Society, Loup City, NE.

The family of Captain Clayton "Ned" Conger created this Life Tributes page to make it easy to share your memories.

Clayton “Ned” Conger passed away peacefully at home on February...

Send flowers to the Conger family.