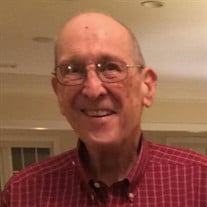 David Alexander Ford, Sr, of Canton, Georgia, died on March 15, 2021, due to complications from Parkinson’s Disease. He died peacefully, surrounded by his loving family. He was predeceased by his parents, Hazel Schultz Ford and Clifford McDermott Ford, of Orange County, California. He is survived by his loving wife of fifty-six years, Helen Hamm Ford; his daughter Leslie Ford and partner Tyler Woods of Tucson, Arizona; son David Alexander Ford, Jr, and wife Meredith, of Duluth, Georgia; daughter Shannan Ford LaPorte and husband Tom of Alpharetta, Georgia; sister Jo Russler of Sacramento, California; sisters-in-law Pat Arnold and Maureen Smith of Nashville, Tennessee; many beloved nieces; and his cherished grandson, Jonathan David “J.D.” Ford. Dave grew up in California, living up and down the state with his family. As a youth, he was active in the Boy Scouts. He graduated at the age of twenty years old from Occidental College in Los Angeles and then earned a PhD in Mathematics from the University of Utah in Salt Lake City. After receiving his degree, he entered the Air Force as an officer, and he was stationed at Redstone Arsenal in Huntsville, Alabama, in the early 1960s. There he worked at NASA, using mathematics to solve problems related to rocket development in the Apollo program. It was in Huntsville that he met his wife, Helen. Soon after they married, Dave and Helen moved to Atlanta, Georgia, where Dave taught at Emory University as an Associate Professor of Mathematics and Computer Science. He remained in this position for forty years. As an effective, dedicated teacher, a highlight of his tenure at Emory was receiving the Emory Williams Distinguished Teaching Award. While living in historic Druid Hills for most of this time, Dave enjoyed playing softball, tennis, and golf, as well as camping, and singing in the Collegium Vocale, a community choral group. After retirement, Dave and Helen moved to Canton, Georgia, to live in the Soleil Community. There he jumped into new pursuits such as becoming a founding member of the Laurel Canyon Optimist Club, continuing his singing with the Soleil Singers and Silver Sounds Chorale, and pursuing his zeal for cooking as a member of Les Marmitons and the Soleil Men’s Cooking Club. Dave also spent time playing bridge with various groups. Always a deep and critical thinker, he enjoyed an abiding passion for reading throughout his life. Another lifelong love of Dave’s was travel. He and Helen traveled extensively, both around the United States and in Europe. He was pleased to have spent at least one night in each of the fifty states, and he loved attending Road Scholar trips with Helen and various of their siblings and friends. Italy was a favorite destination of his, but he found things to love about every journey. He enjoyed food immensely, always savoring local fare along the way. He and his daughter, Shannan, took nine road trips over the years, traversing the continental U.S. from east to west and north to south. They never failed to appreciate the sights and sounds, as well as the time spent together. Dave especially enjoyed an annual trip to Gulf Shores, Alabama, with Helen’s family. Dave delighted in spending time with his family. He continued a tradition begun by his father of playing the game of cribbage. He taught his son, Dave Jr., to play, and later did the same with his grandson J.D. The two of them enjoyed spending time together in this way. Although J.D. accurately described Dave’s two speeds in his last few years as “slow and slower,” Dave continued to love life, cooking, reading, working crossword puzzles, and finding joy in things both large and small. Dave will be greatly missed by those who knew and loved him. Donations can be made in his name to the Laurel Canyon Optimist Club, care of Alan Ludwick, 202 Aster Court, Canton, GA 30114.

David Alexander Ford, Sr, of Canton, Georgia, died on March 15, 2021, due to complications from Parkinson&#8217;s Disease. He died peacefully, surrounded by his loving family. He was predeceased by his parents, Hazel Schultz Ford and Clifford... View Obituary & Service Information

The family of David Alexander Ford Sr. created this Life Tributes page to make it easy to share your memories.

Send flowers to the Ford family.