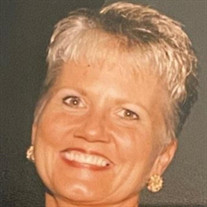 In Loving Memory of Debbie Unterreiner September 20, 1948 – December 4, 2021 Deborah “Debbie” Unterreiner, age 73, passed away peacefully on December 4, 2021 after a long and courageous battle with various health issues. She was a devoted and loving wife, mother and grandmother and leaves a legacy of love. Debbie is survived by her husband, Bernard “Bernie” Unterreiner, her sister Cindy Morrow (husband Buzzy), her children Tricia Dempsey (husband Jeff), Jeff Unterreiner (wife Brandie), Kristin Gresham (husband Michael), Ryan Unterreiner (wife Jana), her grandchildren Griffin Unterreiner, Catherine Dempsey, Evan Cantrell, Greer Unterreiner, Lauren Cantrell, Wakelyn Unterreiner, Ashlyn Gresham, Will Gresham and Zane Colby, her brother-in-law and sisterin- law Bob and Alberta Unterreiner, several cousins, numerous nieces and nephews and many friends. She is preceded in death by her parents Eugene and Delores Cieniewicz. Debbie grew up in Delaware. She was a fun-loving and kind friend and her infectious laughter could light up a room. Debbie was a gifted performer and enjoyed acting and singing in musicals. God crafted a plan for her and Bernie to meet and it was a perfect match. They married in 1968 and eventually transplanted to the metro Atlanta area in 1980. Debbie was a legal assistant for many years, a gifted florist and worked in other capacities, but her most beloved job was being a wife to Bernie, and a mother and grandmother to her 4 beautiful children and 9 grandchildren. She was a loving, selfless, kind, and generous person and will be missed beyond measure. A private mass will be held in her honor at St. Michael The Archangel Roman Catholic Church. The family would deeply covet your prayers at this difficult time. In lieu of flowers, donations to Susan G. Komen for the Cure – Greater Atlanta would be appreciated.

The family of Deborah Jean Unterreiner created this Life Tributes page to make it easy to share your memories.

Send flowers to the Unterreiner family.