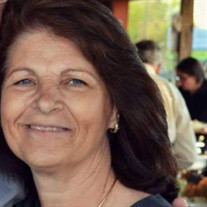 Dorothy “Dot” Ann Taylor, 68, of Jasper, GA, peacefully passed away on February 2nd surrounded by her husband and daughters, after a difficult battle with Leukemia. Dot Taylor was born on November the 25th, 1953 in Levittown Pennsylvania. She rose to executive management with the Home Depot and retired in 2004. After retirement, Dot ran poker tournaments throughout Cherokee, Pickens, and Forsyth Counties. Dot battled MDS Leukemia from 2016 through 2018. After declaring victory, Dot took her passion for antiques and started a business picking and selling with her husband. Dot enjoyed gardening, collecting seashells, traveling, and most of all spending time with her family. As a strong-willed matriarch, Dot was always surrounded by family. While initially dispersed throughout the country, Dot’s daughters settled near her in Georgia to raise their families alongside her. Known as a selfless provider, Dot worked with charities and always gave more than she took. Dot was predeceased by her brothers, Steven and Joseph Wolset. She is survived by her husband, Dell, mother, Catherine Wolset, her four children, Jennifer Ibarra, Michelle Carr, Kimber Portmann, and Jeremy Reynolds, as well as her eight grandchildren, Bailey, Cameron, Logan, Leah, Jack, Zoey, Phoenix, and Arlo, her brother, John Wolset and sister Nancy DeVore. Services will be held at Darby Funeral Home on February 8th where visitation is from 4-6 PM and service at 6. In lieu of flowers, please consider a donation to the Leukemia and Lymphoma Society (LLS.org), St. Jude’s, or The Jekyll Island Foundation’s Sea Turtle Rescue. The Memorial Service will be live-streamed at: https://vimeo.com/event/1806623

Dorothy &#8220;Dot&#8221; Ann Taylor, 68, of Jasper, GA, peacefully passed away on February 2nd surrounded by her husband and daughters, after a difficult battle with Leukemia. Dot Taylor was born on November the 25th, 1953 in Levittown Pennsylvania.... View Obituary & Service Information

The family of Dorothy Ann Taylor created this Life Tributes page to make it easy to share your memories.

Send flowers to the Taylor family.