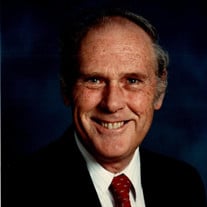 Dr. Edwin R. Casey, Sr. of Canton, Georgia passed away at ManorLake Assisted Living in Canton, Ga. on Feb.15, 2022. His wife, Jean Casey and his children were with him. Dr. Casey’s five children include: Patricia (Casey) Gilman (Buzz), Peggy (Casey) Waldrop (James), Edwin R. Casey, Jr. (Jane), Kathleen Casey Clingerman (Matt), and William Earl Casey (Laura). His grandchildren are Kenneth James Mount (Kate), Christopher Casey Gilman, Kathryn Lee Gilman (Phil Lim), Steven Owen Casey (Leah), Maia (Casey) Sicchitano (Scott), Austin Edwin Casey (Sydnee), Bishop Riley Casey (fiance-Perri Ann Frazier). His greatgrandchildren are Juliet Mount, Lucas Mount, Hayley Lim, and Evan Lim. Dr. Casey hailed from Cedartown, Ga. and has a number of cousins, nephews, and a sister-in-law who survive. Dr. Casey is preceded in death by his father, Roy B. Casey, mother, Evie Viola Hackney Casey, his first wife, Edna Maurine Riley Casey, a sister, Evelyn (Casey) Allison, and a brother, Wiley J. Casey. He served in the European Theatre of Operations for eleven months in the 9th Traffic Regulating Group stationed in Munich, Germany. He was a general clerk handling incoming freight car waybills and invoices. He also made file copies of all shipments received and shipped. He determined the rates of tariffs on commodities and their routes to their destination. He was awarded a WW II Victory Medal, and an Occupation Medal of Germany. After the Army, he attended West Ga. College and then, the University of Georgia. Later he attended NOVA University in Fort Lauderdale for his doctorate. Dr. Casey taught Agriculture and Woodshop Classes at Newnan High School in the early 1950s and then went into administration. He was Principal at Pike County High School (Zebulon, Ga.), Madison County High School(Danielsville, Ga.), and Cherokee High School (Canton,Ga.), from which he retired in 1991. He was a member of the Canton First United Methodist Church. After retirement, Dr. Casey enjoyed making things in his shop, working in the yard, and playing golf, which he did until he was 91. Dr. Casey’s visitation will be at Darby’s Funeral Home on Sunday, Feb. 20 from 2 to6 pm. His funeral service will be at the First United Methodist Church in Canton, Ga on Feb. 21 at 3:00 pm. He will be interred at the National Cemetery in Canton, Ga. on March 1, 2022 at 2:00. In place of flowers, donations can be made to Cherokee High School, 930 Marietta Hwy., Canton, Ga. 30114 or the Canton First United Methodist Church in Canton, Ga.

The family of Dr. Edwin Roy Casey created this Life Tributes page to make it easy to share your memories.

Send flowers to the Casey family.