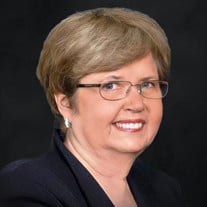 Florence “Flo” Eubanks Hammond, age 78, passed away on Sunday, September 19, 2021 due to a heart attack. She was born August 7, 1943 in Griffin, Georgia to Rosemary Raven Eubanks and Jack Preston Eubanks. Flo worked her entire life starting at Barwick Carpet Mills, Gladney & Allen Accounting Firm, Days Inn Hotels Corporate Office, and finally ending her career at Robinson Humphrey as Vice President of Corporate Finance handling mergers and acquisitions. Being the mover and shaker that she was, retirement did not sit well with Flo. She immediately became licensed as a Realtor in 2005 and began her new career with Harry Norman in Atlanta and later joined Berkshire Hathaway Home Services Georgia Properties where she mainly sold in her new neighborhood, Soleil at Laurel Canyon, in Canton, Georgia. Flo was a dedicated mother and wife. She was so proud of both of her daughters whether supporting them during their teenage years in Cheerleading and Drill Team to having that common thread of having both daughters in their own real estate careers as adults. In the past, Flo and Bob cherished the times they spent at their home on Lake Oconee where they enjoyed boating and fishing with their children and grandchildren. They enjoyed gardening, traveling, shopping, trying new restaurants and cheering on the Georgia Bulldogs. In Flo’s younger years, she played on several competitive women’s and mixed doubles ALTA tennis teams, and in her later years, she took up the sport of pickleball with her neighbors. Flo’s hobbies were many. She loved gardening, traveling, shopping, and trying new restaurants. But above all, Flo was a true example of living life with a Servant’s Heart. She selflessly would help anyone she came in contact with and always put other’s needs before her own. She oversaw the caretaking of both her mother and mother-in-law as they lived out their final years in nursing homes and personal care homes. She would work her full time job and stop by both facilities on Friday afternoon after work and pick up their dirty clothes, launder and fold them and return them on Sunday afternoon before her week started up again. She also exemplified this same spirit with each person that she helped sell or purchase a home. She was one in a million! Last but not least, Flo was a huge animal lover and advocate. She had many beloved dogs throughout her life, but her current fur baby, Jackson, a King Charles Cavalier Spaniel was her little shadow and constant companion. Flo is survived by her loving husband of 60 years, Bobby “Bob” and her two daughters, Bonnie Dean and Laura Warren (Brent); her three grandchildren, Wesley Dean, Preston Dean and Mackenzie Dean; her three great grandchildren, Liliana Dean, Camden Dean and Leyton Dean and her two sisters, Roseanne O’Rear and Frances Eubanks. In lieu of flowers and because our pets give us unconditional love and enrich our lives, Flo would be honored to have donations made in her memory to the local Pet Rescue Organization, Angels Among Us at P.O. Box 821, Alpharetta, GA 30009 or any other animal charity of your choosing. This memorial service will be live-streamed at: https://vimeo.com/event/1307698

The family of Florence "Flo" Eubanks Hammond created this Life Tributes page to make it easy to share your memories.

Send flowers to the Hammond family.