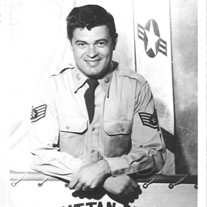 Frank Edward Warrington, age 88, passed away 27 April, 2022. Born 01 September, 1933, in McArthur, Arkansas, he spent 20 years in the United States Air Force as an Air Traffic Controller, achieving the rank of Master Sargent. He was a graduate of the University of Arkansas, Little Rock, and received a Bachelor of Arts degree. As a Korean War veteran, he was at the 38th Parallel for the Korean War Armistice, and completed tours during the Vietnam War. When he wasn’t landing aircraft in the control tower, he was boxing. He won multiple matches, including beating the U.S. Airforce Light Heavy Weight champion, but for some reason, he was unable to get a rematch as a sanctioned fight. However, he won multiple golden gloves bouts, including the Fort Worth regionals, and Midwest golden gloves. He was a life long Arkansas Razorback fan, and was kicked out of the NCO Club while stationed in Chaumont Air Base, France, while listening to the 1964 national championship game, when the Razobacks beat Texas. His favorite past time was fishing, and his favorite lake was Toledo Bend. He met his wife, Peggy Gene Wade, while stationed at Carswell AFB and married in 1956. He retired from the Approach Control Tower in 1990 from Fort Sill, Oklahoma. His surviving family includes his wife Peggy, daughter Linda Burleson, son Frank Jr. “Eddie,” and daughter in law, Lynne. Grand children: Amanda Rich, Jaclyn Herrera, Catherine Burleson, Stormy Canavit, Wyatt Canavit. Great grandchildren: Kalen Simmons, Derrick Simmons, Westley Herrera, Joseph Burleson, Jaydee Rienhardt. He is preceded in death by his son in lawGary Burleson and granddaughter Miranda Burleson. In Lieu of flowers please make donations to Amedisys Home Healthcare and Hospice, 111 Mountain Vista Blvd Suite 145, Canton, GA 30115. Darby Funeral Home is honored to serve the Warrington Family. The Funeral Service will be Live-streamed at: https://vimeo.com/event/2067279

Frank Edward Warrington, age 88, passed away 27 April, 2022. Born 01 September, 1933, in McArthur, Arkansas, he spent 20 years in the United States Air Force as an Air Traffic Controller, achieving the rank of Master Sargent. He was a graduate... View Obituary & Service Information

The family of Frank Edward Warrington Sr. created this Life Tributes page to make it easy to share your memories.

Send flowers to the Warrington family.