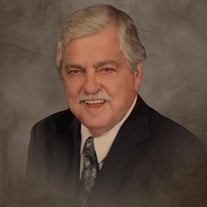 Freddy E. Turner, 78, Canton, GA, passed away Saturday, December 19, 2020, surrounded by his loving wife. Mr. Turner was employed as Sales Manager with Pioneer Aluminum and other subsidiaries for 27 years. He was a member of Hightower Baptist... View Obituary & Service Information

The family of Freddy Elbert Turner created this Life Tributes page to make it easy to share your memories.

Send flowers to the Turner family.