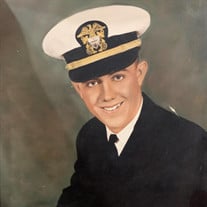 Mr. Gary David Kitchen, age 76, of Dallas, Georgia, passed away Saturday December 19, 2020 at Tranquility Hospice of Kennesaw Mountain. Mr. Kitchen was born July 4, 1944 in Erie, Pennsylvania, to Mr. Edward E. (Laona M.) Kitchen. He graduated from Southern High School in Louisville, KY in 1962. Gary received his degree in Math and Naval Science from the University of Louisville in 1966. He was the President of NROTC Eagle and Anchor Society 1965-66. Gary was a proud veteran of the United States Navy from 1966-1972. He served as a LT USN, Surface Unrestricted Line Officer, Executive Officer -USS Vital (MSO-474), Operations Officer - USS Calcaterra (DER-390), received the National Defense Service Medal and Antarctica Service Medal. Gary went on to become a father which he was very proud of and always involved. He coached his daughter Melinda’s softball team and his son Jason’s baseball and basketball teams for many years. When he became a grandfather, he was actively involved in his grandsons sports as well, taking score and enjoying the game. He was the Founder and President of the LMK Foundation, the foundation has helped over 3,000 Alzheimer’s and Dementia families with respite care. He took great pride in the foundation and established friendships with each family he had the privilege of helping. Gary was a loving, strong, and insightful Dad, grandpa, friend, and colleague who will be greatly missed by all who loved him. He is survived by his daughter; Melinda Kitchen, Marietta, GA; son, Jason (Jolee) Kitchen, Dallas, GA; 3 grandchildren, Jessica Jones, Makenzie Kitchen and Parker Kitchen; many cousins, nieces and nephews, great-nieces and great-nephews. He was preceded in death by his parents, Ed and Laona Kitchen and brother, Edward E. Kitchen, Jr. Funeral services are scheduled for 12:00 noon Monday, January 4, 2021 from the Chapel of Darby Funeral Home with interment and Navy Honors to follow in the Georgia National Cemetery at 2:00pm. Visitation will be 3:00pm - 7:00pm Sunday, January 3, 2021. In Lieu of Flowers please send donations to the LMK Foundation at www.lmkfoundation.org The staff of Darby Funeral Home is honored to serve the Kitchen family.

The family of Gary David Kitchen created this Life Tributes page to make it easy to share your memories.

Send flowers to the Kitchen family.