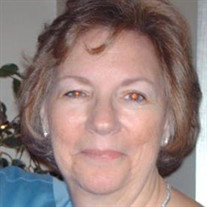 Georgi Tanis, age 73, of Canton, died peacefully in her sleep on January 7th, 2022. Originally from Mount Vernon, New York where she attended Our Lady of Victory Catholic School. During this time, she met the love of her life, Jack Tanis. They spent their days at Hudson Beach Park, The Beechmont, Leno’s Clam Bar, and The Ship Ahoy. They eventually moved to Georgia to be closer to family but never lost their love for Mount Vernon. This is also where she met her life-long best friend, Ellen Grossman. Jack always called them Lucy and Ethel. They shared a love for all things exquisite and shopped hard to find new treasures. Although they were separated by distance, they spoke often and swapped designer purses more often. Georgi was known for her love of the beach and sea turtles. She was passionate about volunteering at the Georgia Sea Turtle Center on Jekyll Island. Georgi traveled to Jekyll as often as she could and spent many days on the beach there. She cleaned the beaches and participated in beach patrols often. When she wasn’t volunteering, she was enjoying Jekyll with her family and friends. Georgi was passionate about helping animals, especially her rescue cats. She was known as a safe haven for cats who needed rescuing, fostering, and rehoming. She loved everything New York. Including the Mets. As avid baseball fans, she and Jack attended many baseball games together and shared their love of the game. Georgi was preceded in death by her sister, Fran Filippone, and her beloved husband Jack Tanis in April 2020. Georgi is survived by her daughters, Noelle Beard and Megan McCormick, her sons-in-law, Donald Beard and Daniel McCormick, her grandchildren Brennan Beard, Callie Beard, and Mara McCormick, and her sister Cathy Logan, and family. Her dog Zoey and her beloved cats: Shrinky, Jeff, Leo, and Momma. The family will receive friends at Darby Funeral Home on Thursday, January 20, 2022, from 6:00pm to 8:00pm. The funeral service will be held on Friday, January 21, 2021, in the chapel of Darby Funeral Home at 9:00am. Interment will follow at Georgia National Cemetery. The caring staff of Darby Funeral Home is honored to serve the Tanis family. The service will be live-streamed at: https://vimeo.com/event/1745819

Georgi Tanis, age 73, of Canton, died peacefully in her sleep on January 7th, 2022. Originally from Mount Vernon, New York where she attended Our Lady of Victory Catholic School. During this time, she met the love of her life, Jack Tanis. They... View Obituary & Service Information

The family of Georgi Tanis created this Life Tributes page to make it easy to share your memories.

Georgi Tanis, age 73, of Canton, died peacefully in her sleep...

Send flowers to the Tanis family.