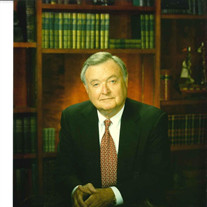 Harry Paul Hall, Jr., of Canton, Georgia and formerly of Atlanta, died at his home on January 20, 2021. He was born in Lee County, Alabama, to Harry P. Hall, Sr. and Geneva “Dee” Turner Hall. The family moved to Columbus, Georgia, where Harry attended St. Elmo School and Columbus High School, graduating in 1947. He attended Emory Junior College at Valdosta, and Emory University in Atlanta, where he was a member of Sigma Alpha Epsilon fraternity. Following his graduation in 1951, Harry entered the Army Counterintelligence Corps, where he was assigned as special agent in counterespionage in Heidelberg and Mannheim, Germany. When his enlistment was completed, he attended Emory Law School, graduating in 1956, and worked as a law assistant to Justice Bond Almand on the Supreme Court for the State of Georgia. He joined the John L. Westmoreland law firm, eventually known as Westmoreland, Hall, McGee, Oxford and Meyerson. In 1994 he opened a solo practice in Buckhead, which he subsequently moved to Canton, Georgia. Harry was active in many bar activities, serving as chairman and co-founder of the Family Law section of the Atlanta Bar Association, and as lecturer for Bridge the Gap and Continuing Legal Education seminars for the Georgia Bar Association. He served on the Board of Governors for the State Bar of Georgia for 14 years. He was Southeast Region Council Member of the Family Law Section of the American Bar Association and was the contributor of articles for its publication, “The Family Lawyer.” He was a lecturer for the National Institute of Trial Advocacy at Emory, the University of Georgia, Mercer University and Georgia State University Law Schools and for the Georgia Trial Lawyers Association. He was a Georgia Fellow of the American Academy of Matrimonial Lawyers and served as President of the Emory Law Alumni Association, as well as co-founder and first president of The Advocates Club. He was named one of the Best Lawyers in America for 14 years. He was a member of the Old War Horse Lawyers Club, a fifty-year member of the Lawyers Club of Atlanta and a Life Member of the Capital City Club. Harry is survived by his wife, Suzanne Kepley Hall of Canton, his son, Harry Ellis “Hank” Hall and his wife Allison, and his daughter, Caroline Hall Knight, all of Atlanta, and his daughter, Nancy Hall Guritz, of Atlanta and Madison, Georgia. He is also survived by his grandchildren, Jordan Hall and his wife Emily, Lindsay Hall, Julian Knight, Patrick Knight, Connors Knight, Callie Guritz and Ellis Guritz. He was preceded in death by his parents, his brother, Joseph Alexander Hall, and his sister, Beth Hall Havard. A private graveside service will be held for immediate family.

The family of Harry Paul Hall Jr. created this Life Tributes page to make it easy to share your memories.

Send flowers to the Hall family.