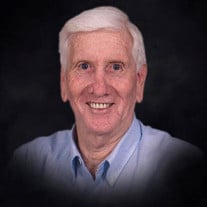 Henderson Dewey Bryson, age 80 of Canton, passed away on Thursday, June 10, 2021 at Northside Hospital Cherokee. The family will receive friends at Darby Funeral Home on Sunday, June 13th and Monday, June 14th from 2-8pm. The funeral will be on Tuesday, June 15th at 2pm in the chapel of Darby Funeral Home with Rev. Trammel Rhodes officiating. Interment will follow at Rolling Hills Cemetery. Mr. Bryson was a lifetime resident of Cherokee County. He was a devout Christian, devoted family man, entrepreneur, and farmer. He was the proud owner of South Cherokee Electric Supply and Cherokee Trucking. His favorite pastime was raising cattle, riding his Tennessee Walker horses, and most of all, spending time with his grandson, Austin. He was a member of the Georgia Cattlemen’s Association and Sharp Top Masonic Lodge # 680. In the words of his grandson Austin, “The world lost a giant and most will never know it. My grandfather was a living embodiment of the American dream. A dirt poor Georgia boy with little to no formal education or training who became a powerhouse in his respective trade. From crossing the country alone as a boy to crossing oceans as a man, he lived a life so full of stories and freedom that most of could not fathom it. Was he perfect? No, but he never claimed to be. He was a man who owned his flawsand strived to do better. A man who always loved to share God’s word with those who cared to listen. Who taught me to ride horses and drive tractors. Who taught me the value of forgiveness and the strength of love. One who taught me things about the Lord that I might not have learned anywhere else. He was a man who instilled me with a love for open ranges, rugged wilderness, and an overall sense of adventure. Situations often found us as though we were each other’s only allies and nothing will ever break the unique bond we shared due to those circumstances. You met me on the day I came into this world. I am honored to have been by your side on the day you left it.” Mr. Bryson was a good whistler! He was preceded in death by his parents, Coleman and Florine Bryson, and his brothers, R.V. and Earl. He is survived by: His adoring wife of 56 years – Laverne Bryson of Canton Son – Jeffrey (Lizzy) Bryson of Canton Grandson – Austin Bryson of Blairsville Brothers – Edward and Albert Sisters – Geraldine, Gurine, Patsy A number of nieces and nephews also survive. In lieu of flowers please make donations to Shriners Children's Hospitals at https://donate.lovetotherescue.org. The caring staff of Darby Funeral Home is honored to serve the Bryson family. This service will be live-streamed at: https://vimeo.com/event/1073431

Henderson Dewey Bryson, age 80 of Canton, passed away on Thursday, June 10, 2021 at Northside Hospital Cherokee. The family will receive friends at Darby Funeral Home on Sunday, June 13th and Monday, June 14th from 2-8pm. The funeral will be... View Obituary & Service Information

The family of Henderson Dewey Bryson created this Life Tributes page to make it easy to share your memories.

Henderson Dewey Bryson, age 80 of Canton, passed away on Thursday,...

Send flowers to the Bryson family.