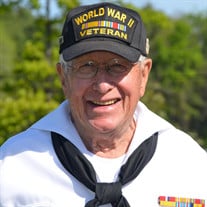 Henry A. Schantz III, 93, of Canton, GA died Friday, November 15 holding hands with his wife of 67 years, Barbara H. Schantz. He was born in Grand Rapids, Michigan on January 14, 1926 to parents Henry and Helen (Bremer) Schantz and lived in Elk Rapids, MI for 32 years until 2018 when they moved closer to family. He was preceded in death by his parents, his brothers, Donald, Walter, and David, and his granddaughter, Emma. He is survived by his wife, Barbara, daughters Vicki (Jim), Kathy (Richard) and son Robert (Barb). His grandchildren include Lauren (AJ) Stark, Leslie Toth, Paul Brandeis, Alex Brandeis, and Jacob Schantz. Great-grandchildren are Landon James Stark and Dylan Alexander Stark. In 1943, Henry enlisted in the Navy and served as Quartermaster in the Pacific during WWII. He attended Grand Rapids Junior College and Michigan State University. He owned and operated Schantz Hardware and Schantz Ski Shop with his brother, Wally, in downtown Grand Rapids until 1985. Building a home overlooking Elk Lake in 1986, Henry and Barbara developed an extensive outdoor garden railroad which they gladly shared with many family and friends. Henry loved the outdoors, boating, and racing sailboats, either on water or ice. He sailed the Chicago/Mackinaw Race for 24 consecutive years. He was the founder of the Grand Traverse Ice Yacht Club in 1987. Snowmobiling, four-wheeling, skiing – both water and snow -- were among his many passions. When not on the water, he could be found inside studying the Civil War. Nehmer Camp located in the Upper Peninsula was organized and incorporated by Henry. Father/son weekends, work weeks, and deer hunting were only second to the many close Nehmer friends he cherished. Henry served on the Antrim County Public Works board. He was a life member of the V.F.W. and a proud member of AMVETS Post 114. In his later years, he enjoyed giving presentations in uniform to school children of all ages. He was an Elder in First Presbyterian Church and supported Presbytery Point Camp. A private memorial service will be held in Canton, Georgia. Memorials can be made to First Presbyterian Church, 404 Spruce Street, Elk Rapids, Michigan 49629.

Henry A. Schantz III, 93, of Canton, GA died Friday, November 15 holding hands with his wife of 67 years, Barbara H. Schantz. He was born in Grand Rapids, Michigan on January 14, 1926 to parents Henry and Helen (Bremer) Schantz and lived in... View Obituary & Service Information

The family of Henry Alfred Schantz III created this Life Tributes page to make it easy to share your memories.

Send flowers to the Schantz family.