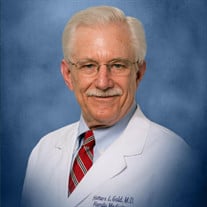 Dr. Homer L. “Nugget” Gold, Jr. passed away peacefully in the early hours of the morning on Wednesday, August 11, 2021. Nugget was born in Sinton, TX on October 3, 1945, to Homer L. Gold and Georgia McGlothlin Gold. Growing up on a farm, he learned the value of hard work as a child and applied it to all aspects of his life. He attended Sinton High School, Abilene Christian University and received his Doctor of Medicine degree from the University of Texas Medical Branch. His Internship and Residency were completed at John Peter Smith Hospital in Fort Worth, TX. Dr. Gold began his practice of Family Medicine in Canton, GA, in 1973, with Sequoyah Family Practice followed by nearly three decades at Medical Associates of North Georgia. He truly loved the practice of medicine and took great care with each and every one of his patients. His colleagues inspired him daily and provided him with support and friendship he treasured throughout his career. Nugget and Pat, his wife of over 41 years, have been long-time advocates of the Canton community, active members of Canton First United Methodist Church and have dedicated many hours of service to various organizations in Cherokee County. He was proud to be one of the original members of the Board of Directors of North Georgia National Bank, later becoming Bank of North Georgia and now Synovus Bank. For many years, he could be found at Riverfest every September, visiting his children’s schools for Career Day, coaching first base in Little League and singing in the church choir on Sunday’s. Earning his pilot’s license as a teenager, Nugget was an avid lover of aviation and enjoyed his involvement with the Cherokee County Airport Authority where he served as the Chairman of the Board from 1988-1996. The friendships and memories he built at that hangar were always deeply cherished. In addition, some might be surprised to learn of Nugget’s passion for stock car racing. He proudly held the position of ‘Right Front Tire Carrier’ during his tenure of traveling with Mike Miller on the ASA circuit. Family was first and foremost to Nugget. He and Pat loved to travel and enjoyed many trips abroad, Wiffer getaways with friends and family vacations at the beach. His four children were his absolute pride and joy, and he did not hesitate to brag on them regularly. As each transitioned into adulthood, he placed a special importance on making sure to develop friendships with them as well and often made weekly Sunday calls just to “check in”. He was blessed with four grandchildren, who affectionately refer to him as “Doc”, and loved watching them grow. Dr. Gold is survived by his wife Patricia Gold of Canton; Daughter Kendi (Chris) Gilmore of Knoxville, TN; Daughter Shanna (Eric) Johnson of Athens, GA; Daughter Megan (Mark) Curry of The Woodlands, TX; Son Michael (Brianna) Gold of Winter Garden, FL; Grandchildren Caleb (Sarah Kate) Gilmore, Peyton Gilmore, Ella Johnson and Annie Johnson. The family will receive visitors at Darby Funeral Home on Sunday, August 15th from 2-6pm. A Memorial Service will be held on Monday, August 16th at 2pm at Canton First United Methodist Church. In lieu of flowers, the family has requested donations be made to St. Jude Children’s Research Hospital or Canton First United Methodist Church Family Fund.

The family of Dr. Homer Lecil Gold Jr. created this Life Tributes page to make it easy to share your memories.

Send flowers to the Gold family.