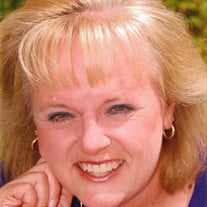 Jayne Marie Cassella 15 July, 1962 to 23 November, 2020 Jayne Marie Cassella, loving wife of James Cassella, peacefully succumbed to her gallant battle with cancer on 23 November, 2020. Jayne was a resident of the Woodmont section of Canton, Georgia. Jayne was born in Bradford, Pennsylvania on 15 July, 1962 to Calvin E. and Gloria Swanson. When she was just an infant, the family moved to Walkersville, Maryland and later to Bowie, Maryland. This became her childhood home. She was the youngest of seven children and grew up in a loving family where she learned the values of trust, honesty, sharing, and pulling one’s own weight. Jayne graduated from Bowie High School in 1980 and went on to earn her Bachelor of Science degree in accounting from the University of Maryland. Soon after graduation, Jayne moved to southern California to begin her career in accounting focused on the telecommunications industry. Jayne rose to be a senior accounting manager for several large firms. During one of her jobs, she had phone meetings with another accounting manager living in Connecticut. Little did she know that this person on the phoneline had been praying for a special person to come into his life. After many months of getting to know each other over the phone (along with some business), she flew to Connecticut to meet this person. Upon arrival, she met who turned out to be the love of her life and future husband, James Cassella ---- better known to family and friends as Jimmy. Jayne and Jimmy were married on 4 May, 1991 in Durham, Connecticut. Jimmy quickly was “adopted” into the large Swanson family and thought of Jayne’s parents just like his own. Jayne had great memories of trips with Jimmy and her parents to Highlands North Carolina and Bar Harbor Maine. She often told the story of how the four of them drove from Connecticut to Maine in search of the perfect lobster dinner, finally settling on one just across the Canadian border. Jayne’s passions included cooking and holiday decorating. She was known for her fabulous homemade muffins, prize winning cheesecakes, and an endless collection of holiday decorations which included countless Santa figurines. But, nothing exceeded Jayne’s passion for raising Golden Retrievers. Eddie, Rudy, Finn, and Casey were her “boys” and she would often be seen walking her beautiful Retrievers through the Enclave. Jayne even developed a system for ensuring she walked them the same distance by leaving stick markers along their path to count the laps around the block. That was her accountant roots showing through in her daily life. When Jayne was battling cancer and undergoing treatments, she was forced to spend many hours away from her “boys”. So, she brought them along in spirit with a rag doll version of her Retrievers which provided her comfort and warmth during her arduous journey. Jayne was always there to help others. She organized Christmas cookie exchanges, neighborhood Halloween festivals, and provided a Georgian winter home for her widowed mother for many years. Jayne had a special relationship with her dear older friend Jane, providing much needed companionship. She became such a good friend to the elder Jane that “Plain Jane” referred to Jayne as her “Fancy Jayne” because she had the extra “y” in her first name. Jayne always made everyone around her feel valued and special. During her cancer journey, Jayne once said that she had a vision from God that said, “Don’t worry, everything will be alright”. God called her home this year where she is now looking upon all of us and reminding us daily that truly, everything is indeed alright. Jayne is survived by her loving husband of 29 years; two brothers, Kevin Swanson of Columbia, Maryland and Kimball Swanson of Waynesboro, Virginia; four sisters, Susan Lohman of Waldorf, Maryland, Roxanne Johnson of Bowie, Maryland, Kelly Swanson of San Diego, California, and Kerry Brownlowe of Canton, Georgia; eleven nieces and nephews, Lauren Lohman, Kristen Lohman, Chloe Swanson, Katie Swanson, Sara Swanson, Dustin Swanson, Beaux Swanson, Amanda Johnson, Kyle Johnson, Jeremy Brownlowe, Jake Brownlowe, and one grandnephew, Torin Swanson. Services will be held at The Darby Funeral Home in Canton, Georgia. A viewing is scheduled for Wednesday, 2 December from 4:00 to 6:00 pm with a Catholic service on Thursday, 3 December at 11:00 am, followed by a reception at the Woodmont Golf Club in Cherokee Hall. In lieu of flowers, you are encouraged to provide donations to The Wellstar Community Hospice Angel Fund Endowment c/o Wellstar Foundation, 805 Sandy Plains Road, Suite 100, Marietta, Georgia, 30066. Online giving can be accomplished via www.wellstar.org/givetohospice.

The family of Jayne Marie Cassella created this Life Tributes page to make it easy to share your memories.

Send flowers to the Cassella family.