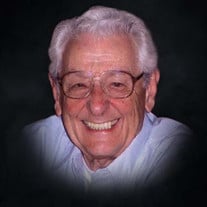 World War II Veteran Died Tuesday Jesse H. (Jack) Vardaman Jr., resident of Alpharetta, Georgia, passed away at the age of 95 Tuesday morning, 9/15/2020, in his family home of 47 years. He was a respected and beloved father, grandfather, great grandfather, great-great grandfather, uncle, friend, and companion. Jack was born in Millersburg, Ohio to Elsie Bell Vardaman and Jesse H. Vardaman, Sr. on November 4, 1924. Jack attended and graduated from Bessemer High School in Alabama. At 18 years old, straight out of high school, Jack joined the US Navy and earned the rank of Petty Officer, Second Class Sonarman. Jack was a decorated veteran and was awarded many medals for his time and valiant efforts serving the country he loved during WWII and later during The Korean War. These medals included the American Area Victory Medal WWII, the Philippine Liberation Medal, the Asiatic-Pacific Medal With 1 Silver and 3 Bronze Stars, the Philippine Republic Presidential Unit Citation With 1 Bronze Star, the National Defense Service Medal, and the Good Conduct Medal. Jack saw battle in the South Pacific Ocean at the Battle of the Philippine Sea, and the Marianas Islands Campaign, as well as seeing action at the Battle of Okinawa. Stationed mostly aboard destroyer ships, Jack was aboard the USS David W. Taylor when the ship was acting as an escort for a convoy carrying occupation troops for Japan. Jack and his fellow troops escorted the First US Representative to Kyushu to accept the 1945 surrender of Japan. Jack later joined the US Naval Reserves and served during the Korean War from 1951-1952. Jack graduated from the Atlanta Division of the University of Georgia in 1954. One of the proudest choices in Jack's life was his long career as a dedicated civil servant for the Internal Revenue Service from which he retired in 1985. Jack had several deeply loved hobbies and interests. Because of his dedication and love for genealogy, he was known to be one of the foremost Vardaman family historians in the nation. Jack's incredible talent and lifelong devotion to the research and documentation of genealogical and wartime history will serve countless families and historians for infinite years to come. Jack also enjoyed traveling to family gravesites and those of fellow service members and worked tirelessly to picture and document them for families and historians. Jack was an avid bowler and continued bowling in the local senior leagues until March of 2020. He spoke fondly of this as one of his favorite pastimes which was where he met some of his closest and most cherished friends. In his final days, Jack noted how important their friendship and companionship had been in his life. He loved and enjoyed the mountains, the Blue Ridge Parkway, admired birds, trains, and adored American lighthouses. In fact, in his younger days, Jack had the dream of visiting all of the lighthouses in the United States. He shared that, while he did not ever get to see all of them, he got to visit many and it had brought him great pleasure. Jack Vardaman was preceded in death by his long term companion, Carolyn (Wylodene) Rucker and his beloved daughter Paula Jeanne Vardaman. Jack is survived by daughter Toni Kennett-Moody, her spouse Chester Moody, son Jesse H. Vardaman III, daughter Jenifer Skywark, granddaughters Alyson Kennett and Jessica Skywark, great grandchildren, Cody and Corey Little and Ben Trudeau, and great-great grandchildren, Melanie and Selah Little. In lieu of flowers, the family requests that donations be made in Jack's honor to K9's For Warriors or The Folds of Honor. Jack will be greatly missed by all who knew him. May he rest in heaven in eternal peace. Visitation and will be 10:00AM – 1:00PM Saturday September 19, 2020 at Darby Funeral Home with funeral services beginning at 1:00PM in the Chapel of Darby Funeral Home. Reverend Dean VonFeldt will officiate. Interment with Navy Honors will be Tuesday September 22nd in the Georgia National Cemetery. The staff of Darby Funeral Home is honored to serve the Vardaman Family.

The family of Jesse Harris Vardaman Jr. created this Life Tributes page to make it easy to share your memories.

Send flowers to the Vardaman family.