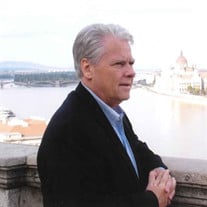 John William Hudson was a beloved husband, father, father-in-law, grandfather, brother, stepfather, uncle, and friend. He died on December 5, 2019 near his home in Canton, Georgia. Born on February 1, 1947, John left home at 18 to join the Marine Corps, serving from 1966 through 1968. The Marine Corps remained an important part of John’s identity for the rest of life. Following his service, John used the G.I. Bill to earn a triple degree in Business, Marketing, and Communications from San Diego State University, and, after working his way up to executive positions in the electronics and IT industry, started and sold his own company. After retiring, John was happiest when spending time with his beloved wife, Melanie, along with the many animals who were part of their family through the years. John rescued several homeless cats and dogs and supported a number of local no-kill animal shelters. John and Melanie particularly enjoyed their many vacations together, including most recently to Greece, China, and Japan. Even in retirement, John was relentlessly dedicated to self-improvement, teaching himself how to trade stocks, working on his golf game, and staying fit. John was deeply proud of his three sons and shared many of his greatest passions with them. An avid drummer as a young man, John shared his love of music with his oldest son Ryan, inspiring him to pursue his dream to become a musician. John’s second son Todd inherited his reverence for nature and longing for outdoor adventure — as has Todd’s son and John’s oldest grandson Teddy, who is a budding cyclist and rock climber. John’s youngest son Brett took up the mantle of John’s service, serving in the United States Air Force for six years. John will also be dearly missed by his two sisters, Mary and Susan, his daughters-in-law, Leslie and Kat, his baby grandson James, and his stepson Michael and stepdaughter Jacqueline. John’s family will most remember his unique sense of humor, his extraordinary generosity, and his affectionate nature, all of which made spending time with John a true joy. Contributions in John's memory can be made to www.furkids.org

John William Hudson was a beloved husband, father, father-in-law, grandfather, brother, stepfather, uncle, and friend. He died on December 5, 2019 near his home in Canton, Georgia. Born on February 1, 1947, John left home at 18 to join the... View Obituary & Service Information

The family of John William Hudson created this Life Tributes page to make it easy to share your memories.

Send flowers to the Hudson family.