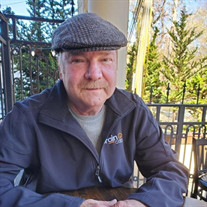 John Charles Mennicke, age 61, of Woodstock, Georgia, passed away peacefully in his sleep on Monday September 27, 2021. John was born January 26, 1960 in Milwaukee, Wisconsin, the son of Margaret Bohlman (Stenulson) and the late Martin Carl Mennicke. John served in the US Army, where he learned his passion for computer repair. John worked at many companies including TTS, JCM Technologies, CHE Consulting and HPES. His most recent job was at Brain Corporation, a job he absolutely loved. Working on computers was a favorite of John’s as he said they never talked back. He also had a gift for cooking and gardening - he was always doing something outside. John was very talented in many respects: He made musical instruments and windchimes that he would tune himself to make the most beautiful sounds. John loved going to church and was active in the choir until he was hospitalized back in 2018. At that time, he felt he could not sing anymore though his love of music never wained. John was a devoted husband, father and grandfather. John taught his children to be loving, kind and humble. He loved his grandbabies more than anything. Most of all, was his love for God and his strong faith. John is survived by his Wife, Cynthia Mennicke of Woodstock, GA, Mother, Margaret Bohlman of Wisconsin, Mother-in-Law, Shirley Schmoock, Grayling, MI, Daughter, Joyce Lynn Oliver, Marietta, GA, Son, Ronald Scott Mennicke, Cumming, GA, Son, Joshua Charles Mennicke (Elisha Lowe) Canton, GA, Brother, Paul Mennicke, Wisconsin, Brother, Mark (Mary) Mennicke, Wisconsin, Grandchildren, Travis Griffin Oliver, Gavin Scott Oliver, Lincoln Scott Mennicke, Everette Mennicke. Preceded in death by his Father Martin Carl Mennicke and Father-in-Law, Norman W. Schmoock. Visitation will be held at Timothy Lutheran Church, 556 Arnold Mill Road, Woodstock, GA on Tuesday, October 5, 2021 from 11:00 am to 12:00 noon. Funeral Service will take place at 12:00 noon with a luncheon afterwards. Interment will be at Georgia National Cemetery on October 27, 2021 at 1:00 p.m. Condolences may be sent to the family at www.darbyfuneralhome.com. To send flowers or a memorial gift to the family of John Charles Mennicke please visit our Sympathy Store The caring staff of Darby Funeral Home is honored to serve the Mennicke family.

The family of John Charles Mennicke created this Life Tributes page to make it easy to share your memories.

Send flowers to the Mennicke family.