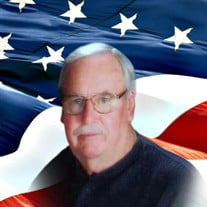 Joe Wilson, 83 died peacefully 11 April 2020 at his home in Woodstock Georgia, After a long battle with Cancer. He was born in August to Benjamin and Cora May of California. After serving his tour of Duty in the US Navy during the Korean War, he met the love of his life Karen, they were married in November 1958, and had two Sons, Joe Jr, and Jeff. He is preceded in death by his Son Jeff, Brothers Bill, John, and Sisters Brenda and Mildred. He is survived by his Wife Karen, Son Joe Jr. and daughter Patty, five Grandchildren Andrew, Jaime, Edward, Vincent, and Christopher, brother Bob, many Nephews, Nieces, and Cousins. Joe was a loving, caring Husband, Dad, Grandpa, Brother, Uncle and beloved friend to many. He loved life, and lived it to the fullest. His passion was his family, he was a man of honor and loved his country. His smile, as well as his laugh, was infectious. Joe never met a stranger, and always had an open hand to lend. His words and a simple handshake were his bond. His greatest joy, beside being a Loving husband, was being a Dad. He volunteered often, Little League assistant coach, and before “T-Ball” was invented, he designed and built one for the teams to use for practice. He loved sports and music and encouraged his sons to follow their passions for it. He served as a Band Roadie and worked tirelessly to maintain equipment, even building a set of “Tri-toms” for drummers from an old set of drums. He went to every band and sporting event he could. He loved the University of Southern California, and the Trojan Football team. On any Saturday you would hear “Fight On”. (Of course in response, I would give him my best “Go Bruins!” for my beloved UCLA). He was the Greatest Dad. There wasn’t anything that he couldn’t do, he would find a way. Always loved learning new things and how things worked, and would figure them out. While working at the Hospital, he was asked if he could learn how to make signs. Of course his answer was as always, yes. He developed a new passion for graphic design, and would carry this into his retirement starting his own business. He enjoyed gardening, and as with everything else he touched, plants grew and blossomed like his family. He guided his family with Wisdom, Love, Understanding and Compassion. He loved to travel the world with Karen and friends, visiting many countries, as well as his great nation that he liked to say was the “Greatest in the World”. He retired to Georgia to be close to his Sons, Daughter and Grandchildren. We were so Blessed to have him here with us for over a decade. When asked on his birthday by his Granddaughter “What his favorite birthday was?” He answered, “When WWII ended in 1945”. His memory of all the neighbors and family being out in the street celebrating the Victory. He fought a good fight against cancer. Always with a positive attitude, a Love of God, and a smile. It was a “Life well Lived”. And for one final time.. “Go Bruins Pop” I love you!

Joe Wilson, 83 died peacefully 11 April 2020 at his home in Woodstock Georgia, After a long battle with Cancer. He was born in August to Benjamin and Cora May of California. After serving his tour of Duty in the US Navy during the Korean War,... View Obituary & Service Information

The family of Joseph Warren Wilson created this Life Tributes page to make it easy to share your memories.

Send flowers to the Wilson family.