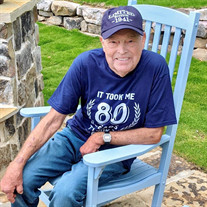 Julian “Ronnie” Bell, 80, of Canton, Georgia passed away peacefully in his home on May 3, 2022. Ronnie was born June 1, 1941, in Atlanta, GA to Julian Lamar (Doodle) and Dorothy (Dot) Bell. After graduating from West Fulton High School, he went on to work as a Machine Shop Foreman for 40 years at the Georgia Institute of Technology. In 1958, he met his wife, Brenda (York) Bell, playing horseshoes at English Park. Ronnie and Brenda were married for 60 years and enjoyed four children, Darrin Bell, Cindy Quinn, Michele Bell, and Renee Pritchett. Ronnie was a hardworking, kindhearted, selfless man with a profound sense of humor who loved unconditionally, gave joyously, and was devoted to his wife and children. Ronnie never met a stranger and was loved by all who knew him. His biggest enjoyments in life came from spending time with his family, re-telling numerous stories, traveling, dining out, and yes-yard work. He was an avid Georgia Tech fan who enjoyed sports and spent many Falls at Bobby Dodd stadium watching Tech play with his children and grandchildren. Ronnie was predeceased by his parents, Julian Lamar and Dorothy Bell, his brother, Harold Lamar Bell, and granddaughter, Catherine Costner Quinn. Those left to cherish Ronnie and his legacy are his wife, Brenda Bell, his son, Darrin Bell (Shelly), his three daughters, Cindy Quinn, Michele Bell, Renee Pritchett (Kevin), his six grandchildren, Aaron Quinn, Jordan Quinn (Stacie), Kayla Timberlake (Ryan), Hayden Bell, Dawson Pritchett, Brooke Townsend, and his seven great-grandchildren, Kaylin, Kinsley, Annabelle, Kayliana, Bailey, Adam, and Emilia. There will be a Celebration of Life in his honor held on May 21, 2022. Bring your most joyful memories with you as we celebrate Ronnie. This celebration will be held at the Brayden Park Clubhouse (Brayden Park Drive, Canton, GA) from 1:00-4:00pm. Appetizers and beverages with be served. Please stop by anytime as we honor this remarkable, unforgettable man.

The family of Julian Ronald Bell created this Life Tributes page to make it easy to share your memories.

Send flowers to the Bell family.