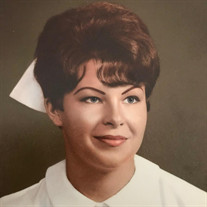 Kathryn Ann Goles Shoemaker, 75, of Canton, GA passed away peacefully on January 29, 2022. Kathy was born January 7, 1947, in Washington, NJ to John and Genevieve Oleski Goles. The middle child of three girls, Kathy graduated in 1964 from the “old” Washington High School. She married her high school sweetheart George Shoemaker from Oxford, NJ and in 1966 their first son George Jr. was born. Her zeal for learning continued and she graduated from Easton (PA) Hospital School of Nursing with a RN degree. This was followed up by her first bachelor's degree from East Stroudsburg University. After working several years at Pocono Hospital in the ER, her second son Bradley was born in 1975. In 1977 the family moved to Des Moines, Iowa where Kathy took a position as a nursing instructor at Iowa Methodist Hospital. Always wanting to grow, she completed a second bachelor's degree along with a master’s degree from Iowa State University. In 1985, the family moved to Albany, GA, while George Jr. stayed in Iowa and completed his degree at Iowa State University. In Albany, Kathy worked for Phoebe Putney Memorial Hospital in various administrative nursing roles. She moved to Knoxville, TN in 1992 and eventually settled in the metro Atlanta area, keeping busy within the nursing field. After retiring, she settled in Canton, GA. When you met Kathy, she made you feel like you and she were lifelong friends. She got her “gift of gab” from her mother, her stubbornness from her father, and her empathy from nursing. With her quick wit, sharp tongue, and frank candor, you knew exactly where you stood with her, whether you liked it or not. She cherished her family and friends and was fond of sharing her warm memories of roller skating and hanging out at a favorite booth at the soda fountain next to the movie theater in Washington. God purposely broke the mold when creating her, as she truly was one of a kind. Your shift is over Queenie! She was predeceased by both of her parents, older sister Geraldine Cole, and her four-legged companion Brandy. Kathy leaves behind her sister Joanne (Glenn) Richcreek of Fairfax VA, son George Jr (Elizabeth) of Berryville, VA, son Bradley (Jenny) of Atlanta, GA, brother-in-law Floyd Cole of Dallas, TX, former husband George of Albany, GA, three grandchildren Kathryn, Vivian, Jett, and a host of nieces, nephews, and many great friends and professional colleagues. Condolences may be sent to George Shoemaker, 233 Tyson Dr., Berryville VA 22611, Bradley Shoemaker, 1250 Brookhaven Hideaway Ct. NE, Brookhaven GA 30319, or Joanne Richcreek, 9417 Pickstone Ct., Fairfax VA 22032. Services will be private.

Kathryn Ann Goles Shoemaker, 75, of Canton, GA passed away peacefully on January 29, 2022. Kathy was born January 7, 1947, in Washington, NJ to John and Genevieve Oleski Goles. The middle child of three girls, Kathy graduated in 1964 from the... View Obituary & Service Information

The family of Kathryn Ann Shoemaker created this Life Tributes page to make it easy to share your memories.

Send flowers to the Shoemaker family.