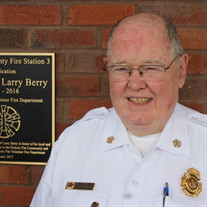 Larry Darrell Berry passed away on January 6, 2021, after a brief illness. Mr. Berry was born in Griffin, GA on August 16, 1940 to L. D. and Jewell Hawkins Berry, and celebrated his 60th wedding anniversary to Patricia Diane Berry on Christmas Day, 2020. Mr. Berry was a graduate of Griffin High School and the Georgia Institute of Technology and served in the U.S. Army, stationed at Ft. Jackson, SC during the Vietnam War. Larry started as an electrical engineer at Western Electric and remained with the company for the rest of his career as it became first AT&T and then Lucent Technologies. There he developed friendships with a group of about two dozen fellow engineers, friendships that spanned 30 years working together and two decades into retirement, as these friends continued to meet together yearly to check in and catch up on each others’ lives. Larry's life was guided by his deep faith in God, and he served faithfully as a member of Mount Zion Baptist Church, Cherokee Baptist Church, and The Pointe Church. In the days when the majority of the county had no fire service, Larry helped establish the Hickory Flat Volunteer Fire Department and served as its chief for over 40 years, working with other county volunteer fire departments to create an organization that became a model of neighbors working together to build a better community for all. When the comprehensive volunteer fire infrastructure was finally absorbed into a professional countywide fire service, Larry continued as a trustee of the Hickory Flat Volunteer Association, working with his closest friends from the fire department to provide CPR/AED and first aid training to the community at little or no cost. Larry was a loyal friend who loved the people of Cherokee County and Hickory Flat and who poured his life into his community; as one tribute noted, "His footprint on the ground in Hickory Flat will remain forever." Larry was predeceased by his parents, L. D. and Jewell Berry, and his brother, Edwin Kline Berry. Larry is survived by his beloved wife, Diane; his three daughters and the sons-in-law to whom he was a second father, Laurie Berry-Dorroh (Dan) of Greenville, SC, Susan Berry (Drew) of Anderson, SC, and Melinda Freeman (Chad) of Canton, GA; nephews Roan Berry and Todd Davis; and Aaron Freeman (Jenny), Justin Freeman, Lydia Dorroh, and Colin Dorroh--four well-loved grandchildren who always knew how much their Pop-Pop cherished them. In the interest of public safety, the family will hold a private graveside service at a later date at the Georgia National Cemetery in Canton, GA, with those who knew and loved Larry present with them in spirit. In lieu of flowers, the family requests that donations be made to The Pointe Church, Canton, GA, Children's Healthcare of Atlanta, or the charity of your choice. Online condolences may be made at www.darbyfuneralhome.com.

Larry Darrell Berry passed away on January 6, 2021, after a brief illness. Mr. Berry was born in Griffin, GA on August 16, 1940 to L. D. and Jewell Hawkins Berry, and celebrated his 60th wedding anniversary to Patricia Diane Berry on Christmas... View Obituary & Service Information

The family of Larry Darrell Berry created this Life Tributes page to make it easy to share your memories.

Send flowers to the Berry family.