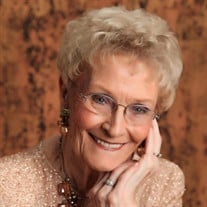 Louise Wade, age 85, died on August 22, 2021 at The Landings at Canton Hills. Louise was born on September 1, 1935 in Cleveland, Ohio, grew up in Winter Park, Florida and lived most of her life in the Shenandoah Valley in Virgina before moving to Georgia to live with her daughter. She was a wife, mother, grandmother, and great-grandmother. She was preceded in death by her parents, brother, twin sister, husband and daughter, Melody Wade. She is survived by her two children, Mike Wade and Wendy Wade, plus grandchildren, great-grandchildren, nieces and nephews. She considered many close friends and caregivers her family also. Louise was a polio survivor, battled Covid, had multiple back/hip surgeries and fought courageously with liver failure. Through all this, Louise was an inspiration to many. She graduated from high school at the age of 16, and studied one year at Rollins College before transferring to the University of Utah to pursue her dream of becoming a professional ballerina. She met and fell in love with John Wade, a football player at the University of Utah, after he drove across the country to see her while she was in an iron lung and told she would never walk again. Louise graduated from the University of NC Greensboro with a Bachelor of History. She completed her master’s and educational specialist degrees in Special Education from The University of Virginia, Charlottesville. Louise made her mark as an educator as she taught students with special needs for Roanoke County, at Pinkard Court and Hardy Road in the 1960s and 1970s. In 1972 , , , she took her students from Pinkard Court to the National Council for Exceptional Children ' s Convention in Washington, D.C. for a crowd of over 500 educators. She was the director and program director at Camp VA Jaycee for 3 summers. Louise taught for the University of Virginia extension division in Buena Vista, Roanoke, Rocky Mt., Martinsville, and Staunton. Louise and her family moved to Dubuque, Iowa in 1977, and she became a regional consultant for the severe, profoundly disabled children at Keystone AEA. She also taught for Clarke College developing a master’s degree program. Louise and husband “Jack” were camp administrators at Camp Winnebago in Caledonia, Minnesota 1978 –1981. During that time, Louise taught Special Education courses for University of Wisconsin, La Crosse. She was a consultant and traveled extensively presenting at conferences across the country. The Wades returned to Virginia in 1981 and she resumed teaching Special Education with UVA and full-time for James Madison University. She served as adjunct faculty at Bridgewater College, Eastern Mennonite, and Mary Baldwin and throughout the area. Louise became the learning disabilities specialist in the LEAP program at New River Community College in 1989 then retired in 1995. She wrote a book “Melody’s Gifts” in 2008 and became Mrs. Senior Virginia in 2011. We salute her life’s accomplishments and passion to serve others. Alzheimer's may have stripped her memory of these achievements, but not her humor, wisdom, grace and beauty. She will be greatly missed. Her ashes will be laid to rest in Virginia. Memorial donations in Louise’s honor may be made to the Special Olympics. Life Verse: Joshua 1:9 “Be strong and courageous. Do not be afraid; do not be discouraged, for the LORD your God will be with you wherever you go.”

Louise Wade, age 85, died on August 22, 2021 at The Landings at Canton Hills. Louise was born on September 1, 1935 in Cleveland, Ohio, grew up in Winter Park, Florida and lived most of her life in the Shenandoah Valley in Virgina before moving... View Obituary & Service Information

GOODBYE, LOUISE “We can think of no greater accolade than that she maximized her love here on earth”

Send flowers to the Wade family.