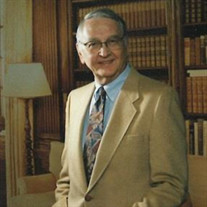 Marvin Andrew Satterfield age 90 of Canton, GA passed away Saturday November 6, 2021 at his residence surrounded by his family. Funeral Services will be held at 2:00PM Tuesday November 9th from the Chapel of Darby Funeral Home with Reverend Horace Richards officiating. Visitation will be Monday November 8th from 2:00PM - 4:00PM and 6:00PM - 8:00PM and Tuesday November 9th from 11:00AM - 2:00PM at Darby Funeral Home. Interment with Military Honors will be at 2:00PM Monday November 15, 2021 in the Georgia National Cemetery. Marvin was a life long resident of Cherokee County. He grew up in the Cotton Mill Village and attended North Canton Elementary and Canton High School. He continued his education at the University of Georgia where he excelled in basketball as team captain and won two S.E.C. Championships in baseball. After college he joined the Army and married his first wife, Catherine Sparks with whom he had three children. At age 27 he became a widower and single parent to these three small children when Catherine passed away. Three years later, he met, fell in love with, and married Virginia Butterworth who became a wonderful mother to his three children and the two others they had together. After completing his military duty he returned home and finished his career in finance and banking 30 plus years. In 2004 he was inducted into the Cherokee County Sports Hall of Fame. Marvin and his loving wife Virginia would have celebrated their 60th Wedding Anniversary on November 11th. Not only was he a loving husband but a loving father, grandfather and great grandfather. He was a proud Dad and Papa to them all. He was a member of Canton First Baptist Church where he had served on several committees and served many years as a deacon for the church. Mr. Satterfield is survived by his wife; Virginia Butterworth Satterfield, Canton, GA, sons; David (Lynn) Satterfield, Louisville, KY, Keith (April) Satterfield, Canton, GA, daughters; Andrea (Erick) Mossinger, Canton, GA, Cathy (Bobby) Townsend, Canton, GA, Carole (Jim) Haley, Canton, GA, brother; Junior Satterfield, Canton, GA, 11 grandchildren and 12 great grandchildren. In lieu of flowers please make donations to the Canton First Baptist Church Debt Relief, 1 Mission Point, Canton, GA 30114. The staff of Darby Funeral Home is honored to serve the Satterfield Family. The service will be live-streamed at: https://vimeo.com/event/1477598

Marvin Andrew Satterfield age 90 of Canton, GA passed away Saturday November 6, 2021 at his residence surrounded by his family. Funeral Services will be held at 2:00PM Tuesday November 9th from the Chapel of Darby Funeral Home with Reverend... View Obituary & Service Information

The family of Marvin Andrew Satterfield created this Life Tributes page to make it easy to share your memories.

Customized sympathy cards. Mailed for you.