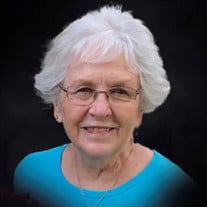 Mary Ann Morgan Banks, age 81 of Canton, passed away on Wednesday, May 19, 2021 at her home, surrounded by family. She is survived by: Son - Christopher Banks (Abbie Malkewitz) of Jacksonville, FL. Daughter - Stephanie (David) Pearson of Chattanooga, TN. Brother - Ray (Susan) Morgan of Jasper Niece - Katie Morgan Grandchildren - Shelby Banks (Zack) Thoutt, Ansley Pearson, Nina Pearson A Celebration of Life service will be held on Sunday, June 27, 2021 at 2:00 PM in the Chapel at Canton First UMC, 730 Lower Scott Mill Road, Canton, GA 30115. All are welcome. Mary Ann was the daughter of A.R. and Edna Morgan, former owners of Morgan Brothers Hardware in Canton. She grew up invested in the performing arts, primarily the piano and flute. She was a member of the first graduating class of Cherokee High School, formerly Canton High, in 1957, playing in the marching and concert bands. Desiring to be a teacher, she obtained her elementary education credentials from North Georgia College and subsequently taught 4th grade in Atlanta. She married Major Larry G. Banks of Brunswick, GA, becoming a career Army wife stationed in bases from Alaska to North Carolina. Later she worked as an administrator and retired from the Dekalb County (GA) school system. She was a lifelong member of Canton First UMC where she sang in the choir and played in the Hilltop Strummers Dulcimer Band. She loved to travel, hiking Glacier National Park, the countryside of Ireland, and even a return trip to Alaska. Mary Ann adored her children and grandchildren and made many visits to and from Jacksonville FL and Chattanooga TN to be involved in their many activities. For Mary Ann, it was her love for her family that defined her. In lieu of flowers, the family requests donations be made to the College Choir Intern Program at Canton First United Methodist Church in her memory.

Mary Ann Morgan Banks, age 81 of Canton, passed away on Wednesday, May 19, 2021 at her home, surrounded by family. She is survived by: Son - Christopher Banks (Abbie Malkewitz) of Jacksonville, FL. Daughter - Stephanie (David) Pearson of Chattanooga,... View Obituary & Service Information

The family of Mary Ann Morgan Banks created this Life Tributes page to make it easy to share your memories.