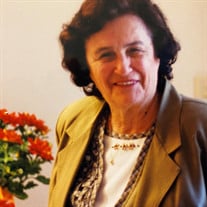 Melbaree Bottoms Cagle, 95, of Canton, affectionately known to those who love her as “Mama Cagle” went to be with her Savior on December 1, 2020. Mrs. Cagle was born on July 14, 1925, and was a lifelong Canton resident and beloved educator to the thousands of students she taught for over 54 years at Oakdale, Avery, Holly Springs, Hickory Flat, and R.M. Moore Elementary Schools. Mrs. Cagle was a graduate of Reinhardt College (Class of 1942) and North Georgia College and State University (Class of 1966). Mrs. Cagle was a kind, classy, lady who was beloved and respected by everyone whose life she touched. Mrs. Cagle is survived by her family including her sons; Lawrence (Sylvia) Mack Cagle, Jr. and Johnny Michael Cagle, both of Canton; and by her five grandchildren; Monica (Chris) Cain of Woodstock, William (Joy) Cole Cagle, Sr., of Canton, Lauren (Casey) Crockett of Cartersville, John (Megan) Martin Cagle of Jacksonville, Zackary Lawarance Cagle of Canton, and a multitude of great-grandkids, nieces, and nephews; all of whom she loved dearly. Mrs. Cagle joins her husband of 75 years, Lawarance Mack Cagle, Sr., in Heaven. In addition to bettering the lives of the hundreds of students she taught during her long career, Mrs. Cagle also enjoyed teaching Sunday school, gardening, cattle farming, raising goats and peacocks, watching the Braves, and above all visiting with her kids and grandkids, who she loved and adored more than anything else. Viewing will be at Darby Funeral Home in Canton on Wednesday, December 2 from 4-6pm. Funeral will be at Oakdale Baptist Church in Canton on Thursday, December 3rd at 2pm with the graveside to follow at Cherokee Memorial Park, with Dan Henderson officiating.

The family of Melbaree Cagle created this Life Tributes page to make it easy to share your memories.

Send flowers to the Cagle family.