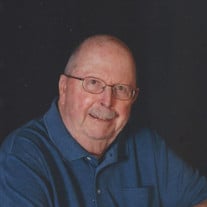 Richard George Bauer was born December 9, 1935, in Kent, OH. To the late Gilbert and Rhea Hamilton Bauer. He attended Kent State University School K through 12 graduating in 1953. He was a chemistry major at Kent State University graduating in 1956. In addition, he earned a Master’s degree in Organic Chemistry from the University of Akron in 1960, and a PhD in Polymer Science from the University of Akron in May 1966. On July 26, 1958, he married Patricia Ann Line of Kent. Mr. Bauer started at General Tire in Akron, worked for Air Reduction in Cleveland, and then Goodyear Tire and Rubber for 33 years. He retired in 1996. He received many patents while at Goodyear. His professional organizations included AAAS and ACS and was over a 50-year member with emeritus. Other organizations include Troop Leader for Boy Scouts Troop 253 while enjoying leading their hikes, Toastmaster at Goodyear, a member of Captain John Collins SAR in Georgia (Sons of the American Revolution) and elected to Kent’s first charter commission and was the principal writer/author of the first charter approved for the city. He and his wife served as lead couple for pre-Cana at KSU Newman Center while he assisted with other duties of the church. He is survived by: Son – Richard M. Bauer of Danbury, CT. He is a research virologist and a PhD. Son – Gregory A. Bauer of Tolman’s Hill, Tasmania, Australia. He is an OB/Gyn at the hospital. Son – Keith E. Bauer of Marietta, GA. He is a Construction Engineer. Grandchildren – Bianca V. Bauer of Lake Mary, FL., Jonathan R. Bauer of Chicago, IL., Erica S. Bauer of New York, New York, Natalie H. Bauer of Philadelphia, PA., Ashley E. Bauer of Washington, DC., and Ryan A. Bauer who is attending Georgia Institute of Technology. His special interest include travel after retirement, camping trips, scuba diving trips, and wintering in Key Largo, FL. At the time of his death, he was living in Canton, GA. where they had moved in 2001. In lieu of flowers, contributions may be made in his memory to KSU Foundation (KSU Foundation) or The University of Akron Polymer Institute (uakron.edu) .

The family of Richard G. Bauer created this Life Tributes page to make it easy to share your memories.

Send flowers to the Bauer family.