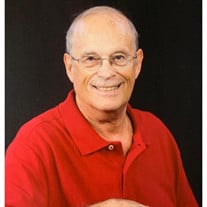 Robert Mitchell, 76, Beloved Husband, Father, and Grandfather Robert Joseph Mitchell passed away peacefully at his home on December 18, 2021 surrounded by family. Robert “Bob”, son of Robert and Louise Mitchell, was born on May 20, 1945 in Portsmouth, OH. He had two sisters, Mary Lou who pre-deceased him, and Sharilyn who lives in Westerville, OH. Bob graduated Notre Dame High School and enlisted in the Navy in 1963. He served his nation during the Vietnam era and then joined Delta Airlines in 1967 in Atlanta, GA. Bob married Anne Morris in 1975 and celebrated 46 years of marriage. Bob worked at Delta Airlines for more than 34 years, retiring in 2002. He was a loving husband, father, and grandfather who put his family and friends above all else. He was passionate about travel and took his family all across the United States, Caribbean, and Europe. Bob was a dedicated Boy Scout leader developing many young men into leaders and Eagle Scouts, including his two sons. As a veteran, he was deeply patriotic and instilled in his sons a sense of duty and service. His sons are Coast Guard and Air Force veterans, following in their father’s footsteps. He was an avid skeet and pistol shooter and enjoyed sharing his hobby with his sons and grandchildren. Bob had a passion for history and travel that he shared with Anne all his life. Together, they flew and cruised all over the world. He was an avid dog lover and cherished his time with his two puppies. Bob will be remembered for his kindness, selflessness, and sense of humor. Bob is survived by his wife, Anne M. Mitchell; two sons, Sean Mitchell (Arlington, VA) and Scott Mitchell (San Antonio, TX); four grandchildren, and four nieces and nephews. The memorial service will be held at Canton First United Methodist Church at 1pm on December 22, 2021. Visitation will be at noon at the Church which is located at 930 Lower Scott Mill Road Canton, GA 30115. Bob will be interred at the Georgia National Cemetery on Monday, January 10, 2022. In lieu of flowers, contributions can be made to the Cherokee County Humane Society at www.cchumanesociety.org or a charity of your choice. The caring staff of Darby Funeral Home is honored to serve the Mitchell family.

The family of Robert Joseph Mitchell created this Life Tributes page to make it easy to share your memories.

Send flowers to the Mitchell family.