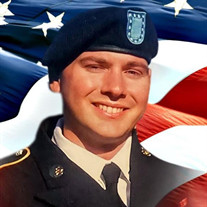 Specialist Vernon Eugene Merrifield III Colton (nickname “Colton”) was born in Clarke County, GA on March 26, 1998 to Ellen Elisabeth “Beth” Colton and Vernon Eugene “Chip” Merrifield. His early years were filled with music and spending time with his beloved big sister, Heaven Lee Colton. Then Beth Colton married Jessie Norveisas on Oct 31st 1999, who just one year later gave Colton the special gift of his brother, Dean Colton. By middle school, Colton had moved in with his Aunt Melanie, Uncle Steve and cousin Lydia in Atlanta, where he attended Henderson Middle and Lakeside High Schools, lettering in JV tennis, JV Cross-Country, JV Baseball and Lakeside Track. He competed in swim team, played multiple seasons of T2 Tennis and ALTA at Leslie Beach Club, baseball at Murphy Chandler Park, travel baseball with the Dunwoody Heat, and worked at the Leslie Beach Club concession stand. He attended and was confirmed at Shallowford Presbyterian Church, attending Youth Group there. During summers, he visited Baltimore to spend time with his grandfather, John Colton, aunt Joan and uncle Will Fink. In tenth grade, Colton moved to be with his brother in the home of John and Tamara Merrihew. He attended Grady High School, served in Army JROTC, played on and was a starter of both the Grady Baseball and Football teams, and started Grady’s first wrestling team, the sport which completed his freshman year at Reinhardt College. He won the best overall athlete award at Grady high school graduation in 2016. In 2017, he attended Georgia State University and worked in the local Atlanta area where he decided to change his life for the best and joined the US Army in 2018. After graduating boot camp in 2018, Colton attended the tactical communications satellite operator course at Fort Gordon GA, one of the hardest Military Occupational Specialties in the US Army. He reported to Fort Hood in Killeen, Texas in 2019 was assigned to the III Corps Headquarters. In the summer of 2020, he survived both COVID-19, and a near-fatal automobile accident. He served our country a few days short of 3 years. It was his intent to serve a full 20 years in the military and deploy in defense of this great nation. He was very interested in becoming an officer in the signal corps prior to his accident last year. Colton was preceded in death by his sister, Heaven Lee Colton, grandparents Vernon and Bonnie Merrifield, and grandmother Alice Ann Robertson Colton. He is survived by his hero and brother Dean Colton, cherished cousin Lydia Podowitz, his parents, Ellen Elisabeth Colton, Vernon Eugene “Chip” Merrifield, John Merrihew, Tamara Shriver, Jesse Norveisas, Melanie and Steve Podowitz, aunts Lisa Merrifield and Joan Colton Fink, uncle Will Fink, grandfather John Colton, and great grandparents Rich and Connie Shriver, as well as innumerable friends and loving adults who coached and led his many athletic and community achievements. In lieu of flowers, the family requests donations to the Wounded Warrior Project or the charity of your choice as a celebration of Colton’s life. The caring staff of Darby Funeral Home is honored to serve the Colton family. The funeral Service will be live-streamed at: https://vimeo.com/event/1384920

The family of Vernon Eugene Colton created this Life Tributes page to make it easy to share your memories.

Send flowers to the Colton family.