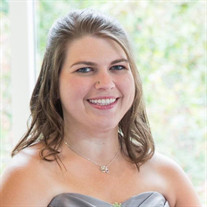 Whitney Faye Russell, loving daughter, granddaughter, sister, aunt and niece, passed away peacefully on August 31, 2020 surrounded by family and the love and prayers of family and friends. Visitation will be Wednesday, September 2, from 6 – 8 pm and funeral services to celebrate her life will be held at 11 am on Thursday, September 3, at Darby Funeral Home. A graveside service will follow at Macedonia Memorial Park, Canton, GA. Whitney was born on June 7, 1987 in Chamblee, GA to Robert Emory and Leesa Faye Bond Russell. She grew up in Smyrna and moved to Canton with her family in 1999. Whitney was a 2005 graduate of Sequoyah High School and attended Southern Poly and Reinhardt College. She spent several years working for the Atlanta Film Festival and most recently worked at NFA Burger in Dunwoody. Whitney loved to read, watch science fiction shows with her dad, volunteering, helping friends, and giving presents to her nieces and nephews. Whitney was preceded in death by her grandparents, Robert and Connie Russell of Sandy Springs, GA, and her grandfather, Bobby Bond of Kernersville, NC. Whitney leaves behind to cherish her memory, her parents, Robert E. and Leesa Faye Bond Russell of Canton; grandmother, Edna Faye Bond, of Kernersville, NC; sisters, Jessie Williams and Nicholas, Lindsey Morris and Tyler; nieces and nephews, Masen and Ella Williams, Avery and Michael Morris, all of Canton; aunt, Rebecca Russell, of Roswell; and many loving extended family members and dear friends. Donations in Whitney’s memory may be made to the Giving Kitchen, 513 Edgewood Ave., Atlanta, GA 30312

Whitney Faye Russell, loving daughter, granddaughter, sister, aunt and niece, passed away peacefully on August 31, 2020 surrounded by family and the love and prayers of family and friends. Visitation will be Wednesday, September 2, from 6 &#8211;... View Obituary & Service Information

The family of Whitney Faye Russell created this Life Tributes page to make it easy to share your memories.

Send flowers to the Russell family.