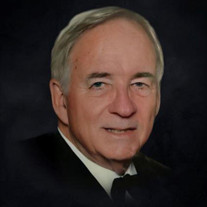 William Nicholas (Nick) Brown, 82, of Canton, Georgia, passed away on Sunday, November 14, 2021. He was born November 27, 1938, in Statesboro, Georgia, to Frances Parker Brown and James Bennett Brown. Nick had an exuberance for life, and a love of God, family, music, and travel. He also had a heart for service and loyalty to his many lifetime friendships and affiliations. Nick was an honor graduate of Statesboro High School, 1956, where he had the distinction of being the Band Captain and playing first chair trumpet. He was also a member of the All-State Choir and the State Winning Boys Quartet in 1955 and 1956. He earned a B.S. in Industrial Engineering from the Georgia Institute of Technology, 1961, and was a member of Alpha Tau Omega fraternity. He earned an M.B.A. from Georgia State University in Finance. He served in the U.S. Air Force Reserve from 1961-67 and was briefly called to active duty during the Cuban Missile Crisis. He spent his career in Construction, including development, commercial and residential projects, and consulting. He served as president of the Statesboro Homebuilding Association and was a charter member of Savannah South Rotary Club. Nick was the proud husband of his beloved wife, Jeanelle Layton Brown, a native of Swainsboro, Georgia; they were married for 59 years. He loved to tell the story of how they first met at the Record Hop in Swainsboro when she was a sophomore at Tift College and he was a senior at Georgia Tech. He fell in love with her beauty and kindness and always said that marrying her in 1962 was the best decision he ever made. They spent many happy years traveling extensively. Nick served his community in many ways over the years. He was a deacon at both Hilton Head Island Baptist Church and Northside Drive Baptist Church in Atlanta. He sang in church choirs and served in leadership and service positions in churches throughout his life. He was a Trustee of the Chapel at Big Canoe and was serving as an Elder at Roswell Presbyterian Church at the time of his death. He was a Charter Director and President of Hillside Neighborhood in Big Canoe and was President of the Board of Directors at Cadence of Woodmont. He enjoyed spending time with his many friends. He loved Georgia Tech and was a charter member of the Georgia Tech Gaggle, a group of ATO fraternity brothers and life-long friends from the 1960’s, who have continued to meet for the past 60 years at Georgia Tech’s Homecoming. He was a member of the Gold Circle and a Life Loyal Tau. He also enjoyed being a member of the North Georgia Veterans Group; the ROMEOS, a social lunch group; and attending his high school reunions. Nick is survived by his wife Jeanelle Layton Brown; his daughters Elizabeth Layton Brown Massengill (David) and Emily Lindsey Brown Yale (Tom); grandchildren David Barrington Yale, Mitchell Allen Massengill and Marlee Elizabeth Massengill; brother James Franklin Brown and many beloved extended family members. He was preceded in death by his mother, Frances Parker Brown, his father, James Bennett Brown, and his brother, Robert Bennett Brown. A Memorial Service will be held at Roswell Presbyterian Church on Friday, December 3, at 11 a.m. A reception will follow. Interment will be in the Georgia National Cemetery, Canton, Georgia. In lieu of flowers, donations can be made to Roswell Presbyterian Church, 755 Mimosa Blvd., Roswell, Georgia 30075 or the Georgia Tech Alpha Tau Omega Fraternity, in which case, checks should be made to Beta Iota Corp. and can be mailed to: Will Mizell, ATO Finance Advisor, 4073 Lake Erin Court, Tucker, Georgia 30084.

William Nicholas (Nick) Brown, 82, of Canton, Georgia, passed away on Sunday, November 14, 2021. He was born November 27, 1938, in Statesboro, Georgia, to Frances Parker Brown and James Bennett Brown. Nick had an exuberance for life, and a love... View Obituary & Service Information

The family of William Nicholas "Nick" Brown created this Life Tributes page to make it easy to share your memories.

Send flowers to the Brown family.