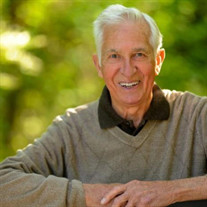 William P Gattung, a life-long resident of Madison Co. IL until 2017, passed away Oct. 7, 2020, short of his 95th birthday. Bill had been residing near family in Canton GA. He was born Nov 16, 1925 to Granite City IL grocers William H. & Clotilda (LaRose) Gattung, the youngest of a large Catholic family, which included an older brother, Kenneth, and five vivacious sisters; Almeda, Bernice, Ruth Ann, Virginia, Marie. Bill grew up during the Great Depression working in the family grocery. Four days after HS graduation, he was inducted into the US Navy. After boot camp, leaving San Francisco aboard the battleship USS Washington, “the biggest thing I’d ever seen”, he looked back at the Golden Gate Bridge. “I didn’t think I’d ever see home again”, he said. He served proudly as a Pharmacists Mate aboard the cruiser USS Baltimore (CA-68). He and his shipmates earned six battle stars for action against the enemy, survived kamikaze attacks and a typhoon, and received a Presidential Citation for safeguarding President Franklin D. Roosevelt on his voyage to Hawaii to plan the invasion of Japan. July 1945, Bill was assigned to Aiea Heights Naval Hospital Hawaii, tending to wounded Marines. After making PhM2C, he was issued Marine fatigues to train for the ground invasion of Japan. When the war ended, he stayed with his Marines at Aiea hospital through April of 1946. He returned home to help run the family’s grocery and married his high school sweetheart, Dorine Thweatt. They raised two boys, Jeff and Paul, and a daughter Becky, on a farm outside Maryville IL. With the untimely passing of Dorine in 1974, he retired some years afterwards to a life chasing golf balls around the Southeast with his buddies. He had a decent handicap well into his 80’s and had a hole-in-one to his credit. In between golf games, he met, dated, and married Audrey Cuiferi of Collinsville IL. An avid bowler, pinochle player, and St Louis Cardinal fan, he also enjoyed an afternoon at the casino and a good Manhattan on his back porch in the evening. Sadly, Audrey passed in 2008. He left this earth with a sharp, concise memory. His stories were a living history of the last century. He will be remembered by the families of the West Granite steelworkers where his father set up home and business, by the many young people he mentored in Maryville, and the people and politicians he served as a member of the Collinsville planning commission. His best friends were young friends, but the people Uncle Bill loved the most were his extended family of nieces, nephews, cousins, and in-laws. The family will receive friends at Darby Funeral Home on Friday, October 16th from 9-10am. A graveside service will follow at 11am at Georgia National Cemetery with Deacon John Stanley officiating. Instead of flowers, per his wishes, please send donations in Bill’s name to Cherokee County Homeless Veterans Program, 130 McClure St, Canton, GA, 30114. )

The family of William Paul Gattung created this Life Tributes page to make it easy to share your memories.

Send flowers to the Gattung family.