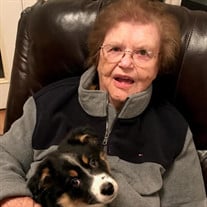 Early on the morning of September 19th, Billie Johnson, having valiantly fought many health crisis’ over the years, decided that it was time to go home. She was the last surviving child of ten children born to Miller and Bessie Lusk. She was born on September 25, 1927. She was preceded in death by her parents, a brother Roscoe Lusk who was shot down in the Pacific during World War II, Jack Lusk, John Lusk, Grady Lusk, Truman Lusk, Winona Lusk Brand, Annie Lusk Cox, Mary Lusk Blanton, and Betty Jo Lusk Martin. Billie Johnson was also preceded in death by a son Charles Johnson who, with a cousin Robin Dobson, was tragically killed by a drunk driver in December 1971. Billie Johnson is also survived by her other four children, Jimmy Johnson, Marcia Johnson, Joy Johnson, and Patricia Martin and beloved daughter in law Jane Holcomb Johnson. She has three grandchildren: Kim (Latrice) Johnson, Amy Johnson Massey (Larry) and Nathan Martin, and she has two great-grandchildren, Atherton and Aughton Massey. Also, she had her beloved friends and caregivers and their husbands: Barbara Kirk and Jim, and Kristina Kidd and Chris; and many loving nieces and nephews, including special niece Mamie Upchurch, and special nephews Steve and Willis Lusk. Willis always called Mother and told her that he loved her, and to “remember that he was her favorite nephew!” Finally, Billie Johnson is survived by her beloved dogs, Skeeter, Boo and Bee, her cats Kittie Kat, Sam and Doosee, and she was fond of horses Bella and Fella. Billie once said, after losing her beloved dog Sassie, that she had come to realize that “the worst loss in life was that of losing a child, but the second worst loss was to lose a pet that you really cared about.” Billie was constantly surrounded by and entertained by a menagerie of pets; they oftentimes found her lap to be the best seat in the house. In coming to appreciate the love of an animal, she said that she valued the fact that they were a constant supportive presence in her life, and “they don’t care anything about how much money I do or don’t have!” In her assessment of her dog Boo, she once cracked up everyone up by saying that “Boo minds really well, the problem is that Boo doesn’t stay minded!” And she always felt that the horses needed a little sweet feed every now and then, “just to keep them interested,” and to make them more cooperative. In her earlier years Billie almost single handedly ran a dairy where a number of cows had to milked twice a day, this was before the advent of modern milking machinery; she said she had to rely on the help of her two sons whom she said “worked like men in their teenage years.” Her brother Grady Lusk once said that “Billie was really a hard- working woman!” Long before the advent of TJ Maxx and Marshall’s discount stores, Billie owned and ran Johnson’s Bargain Store. She drove all over Atlanta going to stores such as Rich’s Department Store, Sears and Roebuck and other large retailers, where she bought their end of season shoes and clothes and sold them at greatly reduced prices in the Canton community. She was also a gifted artist, clothes maker, quilt maker, basket weaver and furniture upholsterer. When business was slow at the bargain store, she could be found in the back of the store making clothing, refinishing furniture, or painting pictures. There was little that Billie could not do; she was self-taught in all of her endeavors, and if she did not know how to do something, like furniture upholstery, she picked up the materials and learned the craft by doing. Billie was a lifelong and currently the oldest member of Shoal Creek Baptist Church in Waleska. She was dedicated to her faith, but often commented “now everybody has their own religion,” she believed that people of different faiths had a right to be respected for their chosen beliefs, and that all religions ultimately led to God. The family would like to thank Northside Hospital Cherokee, their nurses, other care specialists, and the valiant efforts of Dr. Kevin Powell, her surgeon, for their exceptional care of their mother Billie. They also thank Dr. David Field, her personal physician for over thirty-five years of his expert care. And a special thanks to Earl Darby of Darby Funeral Home. In lieu of flowers, the family requests that you make a donation to The Cherokee County Humane Society, so that more animals can find loving homes, and bring joy to people’s lives, as so many animals brought joy to Mother’s life. Mother’s philosophy of life can best be summed up in a quote by Morrie Schwartz, “Everyone knows they’re going to die but nobody believes it. If we did, we would do things differently… Learn how to die and you learn how to live.” Visitation will be at Darby funeral home on Thursday evening 9/24 from 4 until 7 pm, and a graveside service will be held at Ponder Cemetery (Buffington) on Billie’s birthday, September 25th at 2:00 pm, with the Reverend Doug Lusk officiating. Billie Johnson will have a Memorial Service and Lusk Family Reunion (with other friends/relatives) at her home, at a date to be announced soon.

Early on the morning of September 19th, Billie Johnson, having valiantly fought many health crisis&#8217; over the years, decided that it was time to go home. She was the last surviving child of ten children born to Miller and Bessie Lusk.... View Obituary & Service Information

Early on the morning of September 19th, Billie Johnson, having...

Send flowers to the Johnson family.